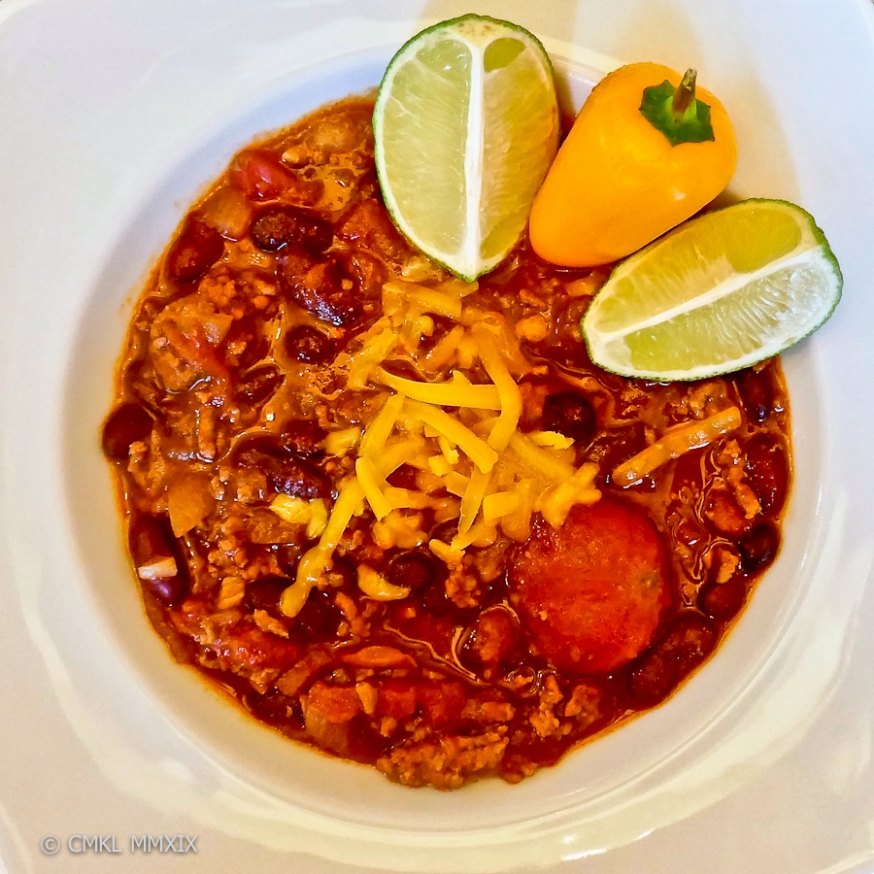 Recently, I was overcome by desire for chili. I had neither cooked nor tasted chili since we left behind our ranch in Central Texas to move to France. Thanks to the mail-order supermarket “My American Market” it has, however, become possible to recreate some of those familiar flavors or at least close facsimiles thereof.

Ingredients for the Chile 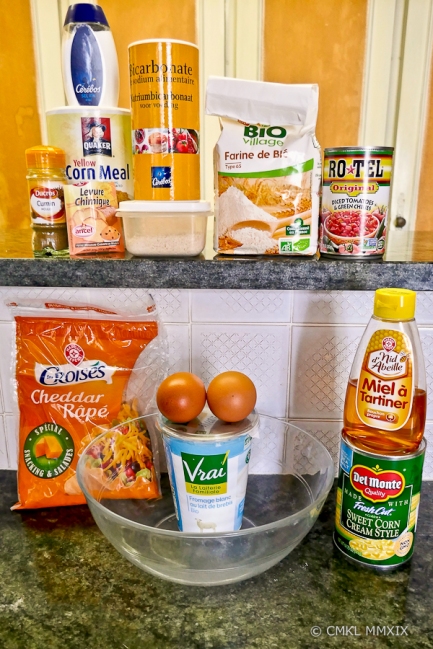 Ingredients for the Cornbread

As it turned out, with the exception of the coarse cornmeal and the can of “Rotel” diced tomatoes & green chilies, all ingredients for this recipe came straight out of our local supermarket. The biggest difference between Ranch chili and French chili was the meat I used. In Texas, we only ate flavorful deer meat, mostly Axis deer, raised on our own land. And the meat for my Ranch chilis was not ground but diced, which added a more interesting texture to the stew. Commercially processed ground beef just can’t match that. A word of caution before we proceed with the cooking. Do not, and I mean not ever call this “Texas chili”. Texas chili consists of beef cubes cooked slowly and gently in a sauce of freshly made chili paste. Period. Tomatoes or, heaven forbid, beans are never to be found in a true Texas’ Bowl o’Red. My chilis, on the other hand, have always included tomatoes and red beans, both from cans. That’s the way I like it.

For my first French chili, I began by softening the diced onion and garlic in a goodly slug of olive oil under low-medium heat before adding the ground beef.

Once the meat was nicely browned, I mixed in most of the can of “Rotel”,

followed by the content of the envelope of “Mexican spices” and a tablespoon of ground cumin seeds, working in the spices while turning up the heat to medium-high.

Under high heat, I doused the mix with the dark beer and scraped the pan bottom vigorously while inhaling all that nice hops aroma. After a couple of minutes, I turned down the heat all the way, put a lid on the pot leaving a very small gap on one side for steam to escape. I let the meat simmer in the beer for around fifteen minutes, stirring occasionally. Then it was time to add the large can of whole, peeled tomatoes with their juice, stir well, put the lid back on and continue to simmer the chili for another hour or so.

While the chili burps and bubbles contentedly, one could utilize this spare hour to get the cornbread going – but only if the chili is meant for the same day. Cornbread is such a lusciously sweet and crumbly kind of bread that it’s most delicious when eaten still warm from the oven, slathered in soft demi-sel Charentaise butter from the local farmer’s market … nothing could be better! You’ve seen a recipe for cornbread in my April 7 post, this time around I used a straight-up 1:1 mix of white wheat flour and yellow cornmeal.

For the dry ingredients, I combined

In a separate bowl, I beat the bejeebers out of

In yet another bowl, I beat the two egg whites with a little salt into fluffy soft peaks, which, on second thought, is a superfluous step I shall not repeat. Considering the coarse cornmeal in conjunction with the creamed corn, it’s a bit silly to try to introduce lightness into such a wet and heavy dough, don’t you agree? 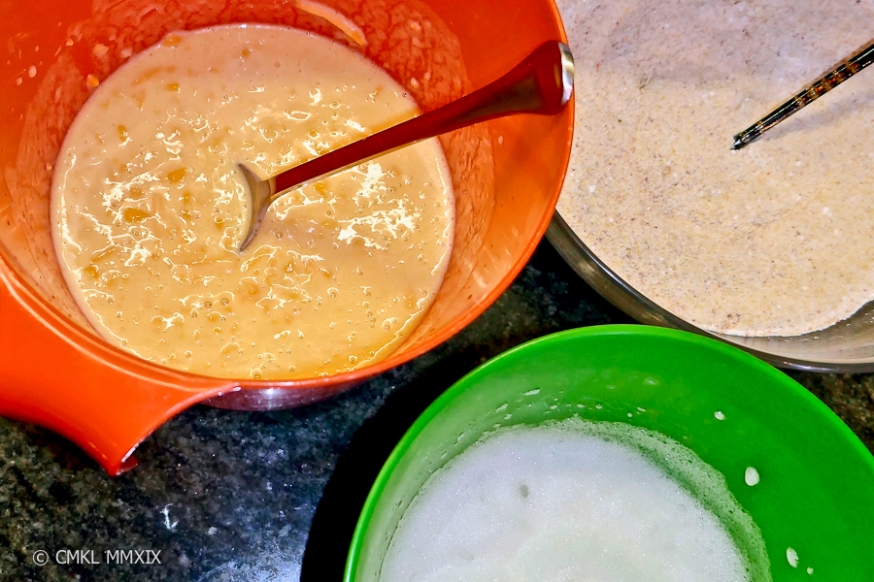 I combined the wet with the dry and folded in the fluffy, pouring the resulting farrago into a baking dish which went into a preheated oven at 200ºC/~400ºF for about 30 min, plus 10 min with the oven turned off. 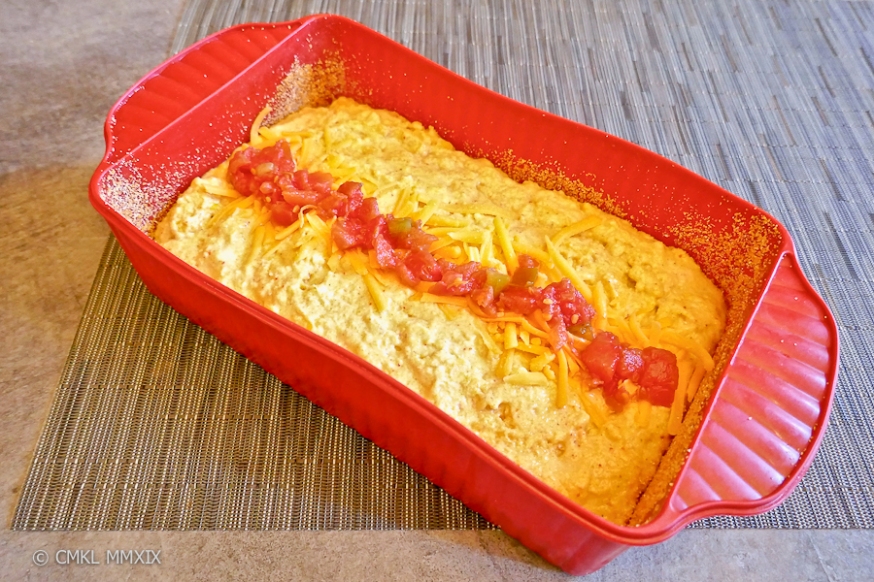 To finish the chili, I added both the coke and the well-rinsed beans and let it simmer without a lid to evaporate some liquid and to heat it through thoroughly for serving.

This kind of chili is extremely benign, suitable for children and spiceophobic adults. It tastes even better reheated and freezes well, so it pays off to make a big batch for easy meals later. If you utilize a chili kit with a separate cayenne pepper envelope, use it sparingly, or not at all if you cook for guests with unknown Scoville scale tolerances. It’s much safer to let the diners heat up their individual portions with Harissa paste. The intensity of the cayenne powder develops through the cooking process and it is difficult to judge the resulting heat level, while the paste is a condiment that you taste immediately. Or set the table with a variety of Tabasco sauce flavors 🌶 Enjoy in good health!