Otherwise known as The Soup of New Year’s Eve. Naturally, the lead photo shows potatoes roasting in duck fat, what else?! To offer an excuse, I have yet to edit so many photos and do so much background research for posts at both this blog and my travel blog that I felt completely overwhelmed yesterday. Therefore, to end the year with a warm and cozy feeling, I decided to postpone my writing to 2020 and cook a rich fish soup for our Saint Sylvestre dinner instead.

Ingredients and proceedings developed pretty much as usual. Celery, fennel, carrot, onion, leek, and potato, the usual suspects, cooked in court bouillon comme d’habitude, as we say around here. This time around, though, I simmered all the ends and trimmings in the bouillon for about an hour, also adding a bundle of dried thyme with laurel leaves and a half an onion with three cloves to the vegetable broth to give it a stronger herbal aroma. For seasoning, I added a teaspoon of umami and some salt to the usual teaspoon of ground coriander seeds. 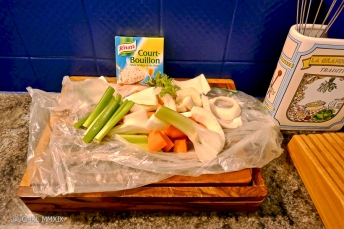 No worries! The bag is bio-degradable. Our store are not allowed to use plastic.

While the stock was simmering, there was time to watch the last few minutes of the “Great British Bake Off” Christmas special and an installment of “Escape to the Country” on SKY TV while roasting les pommes de terre grenailles aka baby potatoes for 10 min @240ºC and marinating the fish with freshly ground pepper, cucurma powder, and lemon zest.

I had bought a Lieu noir filet for the soup, a Pollock or Saithe in English, a Köhler in German. The Pollachius virens, Gadidae, is great for soup because it’s heated through in just a couple of minutes and it is very inexpensive. I read that for marketing reasons, the fish is often sold as Seelachs in Germany. Lachs is the German term for salmon, species that belong to the family of Salmonidae which are much more costly than Gadidae or, in German, Dorsch. That renders the designation of “salmon” for a Köhler a big fat lie.

Back in our kitchen, I first strained the stock, then slow-simmered the finely julienned yellow onion in olive oil for about 15 minutes. I wanted them to be really soft, almost as if they were destined for an onion soup, but not browned. Next in line were the carrots,  plus a little liquid from the stockpot to be soaked up by the carrots.

Before long, the remaining sliced and diced veggies followed,

eventually to be drowned in more stock.

Then the potatoes were added to the simmering soup to finish cooking, while I assembled the salad, opened the wine, sliced the bread, and set the table. Since our dining room is currently in use as an office, we eat even festive diners right next to the stove. 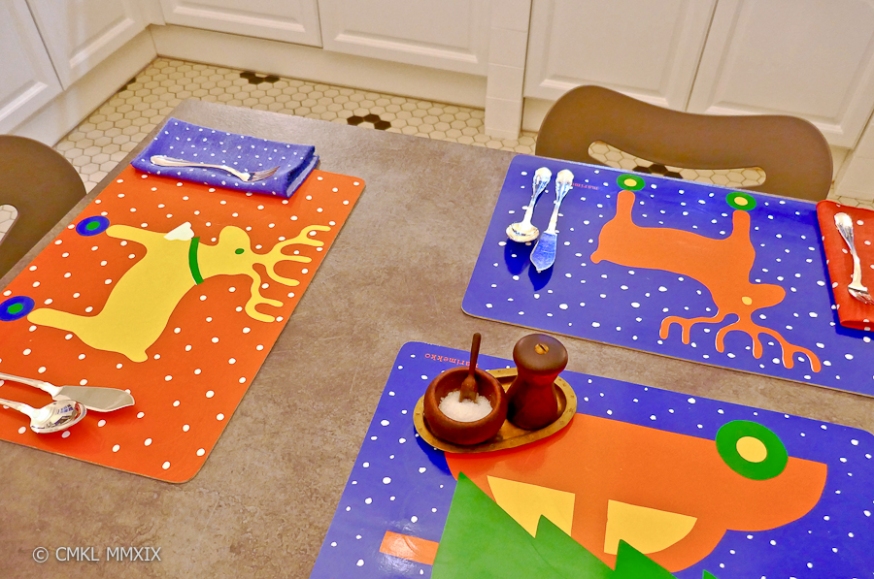 This is a bit of a sentimental picture. The teakwood salt cellar with its miniature shovel and the matching peppermill used to grace my parental dining table when I was a little girl sixty-odd years ago. And those Marimekko design placemats? Well, we’ve been using those for just about 40 seasons now.

Lastly, I added the fish and six big shrimp to the soup and heated a nice dollop of butter in a frying pan for the crowning glory of our New Year’s Eve Fish Soup, six Atlantic Great Scallops, Pecten maximus, not to be confused with the Mediterranean scallops Pecten jacobeus. After two minutes, when the scallops were browned on the bottom, I turned them over and flambéed them in a shot of Ricard. Since I can’t play with fire and take pictures at the same time, sadly, I can’t offer you any pictorial proof of these actions! I can only show you the quite tasty results. 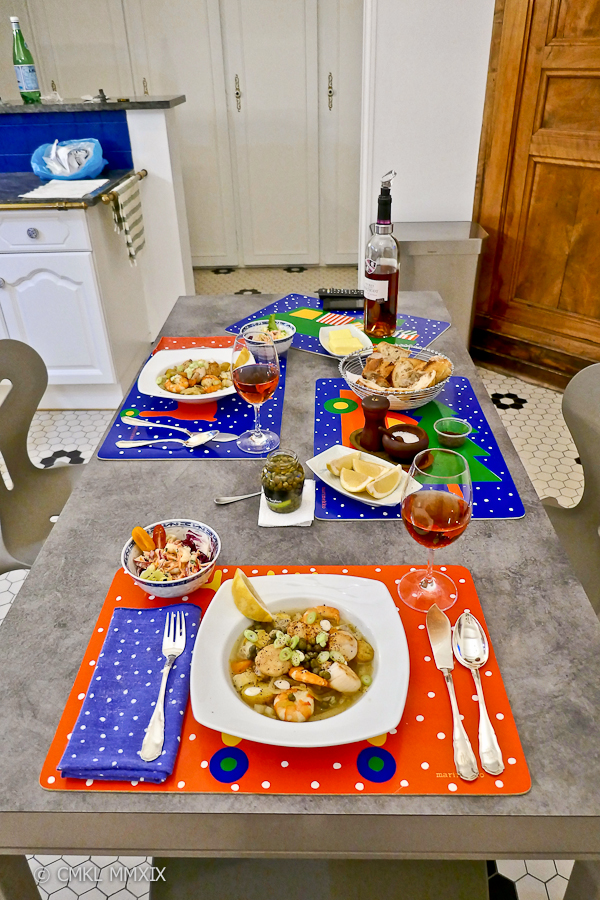 The dirt specs are actually sumac or sumach, Rhus coriaria, Anacardiaceae. The dried Rhus fruit are crushed into a crimson spice with a tart, citrusy flavor. It is apparently a much-loved spice in the Middle Eastern kitchen of which I am woefully ignorant. We were introduced to the spice recently in Bilbao during our extraordinary anniversary dinner at Extanobe Atelier. They very kindly gave us a quantity of sumac to take home with us.

Guten Appetit and my heartfelt Good Wishes for a tasty New Year 2020!

You have to admit, these codpieces -allow me to rephrase- these pieces of cod do look happy! They are about to be steamed in a deep pot filled with vegetables cooked in broth.

The night before, I soaked some Tarbais beans and cooked them while the rest of the vegetables received a good wash and dice-and-slice.

In addition to the beans, there were three more newcomers enhancing my latest version of fish soup, yellow pepper for crunch, algae for ocean saltiness, and freshly grated ginger for punch.

Soon, the ingredients were sorted, ready to go in the pot. 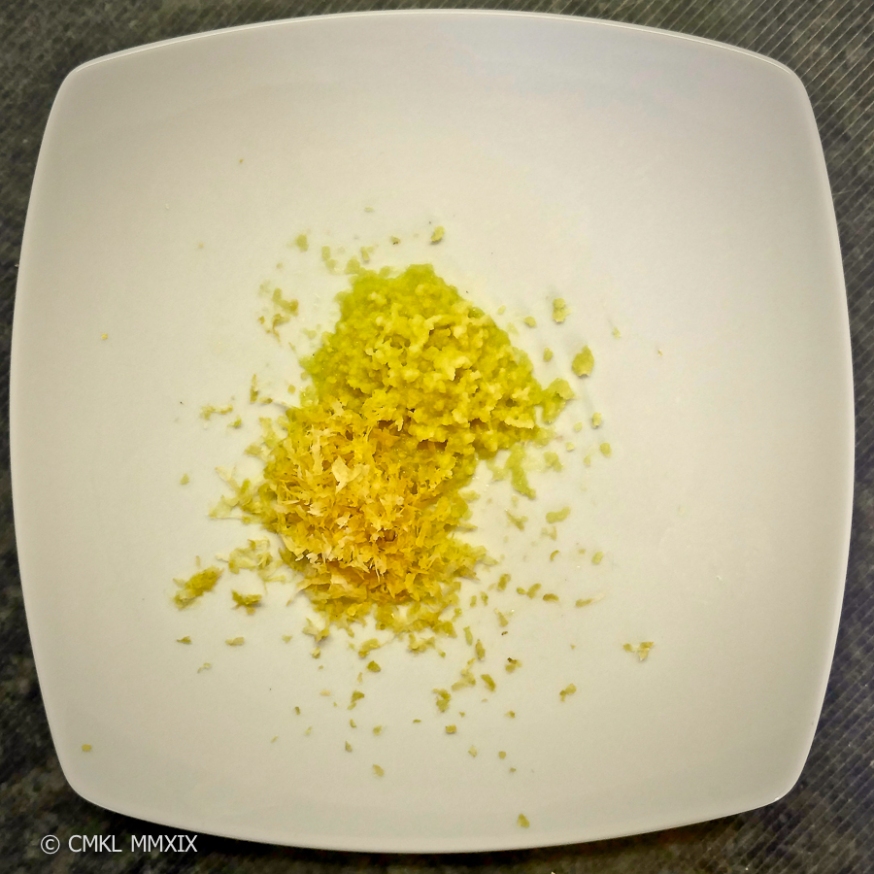 As always, my soup began with the dry toasting of crushed coriander seeds, before heating olive oil to receive the first batch of veggies, followed by ginger and lemon zest. Once that was heated through nicely, it was time to add all the remaining, softer vegetables like fennel, yellow pepper, and parsley, all submerged in Court-Bouillon. 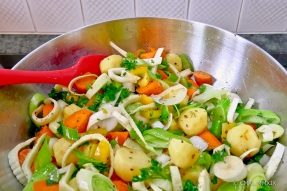 The beans joined the party just ahead of the algae which formed a soft bed for the cod. With the lid firmly closed to steam the happy fish, it will be ready to jump onto your plate in about 15 min.

A glass of peppery Côtes de Gascogne Colombard-Ugni Blanc is a perfect match for this aromatic soup, possibly to be followed by some home-grown sweet and juicy grapes with your cheese course?

After dinner, your partner, like mine, might read a Robert Frost poem to you as you relax in the salon. Such a lovely closing of summertime in Cognac, France – although it did put Monty the Fox to sleep.

For a variety of reasons, I haven’t cooked much lately, but when I recently received the medical advice to eat less raw vegetables in favor of the cooked variety, I went straight to the market and stocked up on root veggies, greens, and two lovely pieces of dos de cabillaud otherwise known as cod.

After scrubbing everything, I started by separating the “good” parts of the veggies for the soup from the odds and ends to be discarded. Those I collected in a large pot of water with two cubes of Court-Bouillon heating up on the stove.

Adding a handful of cardamom seeds and curly parsley, I let these “aromatics” simmer to extract all of their flavors while I sliced and diced the vegetables for the soup. We had, in order of cooking, potatoes, carrots, shallots, leeks, celery, and fennel.

The dirt bits are coriander seeds

As always, I dry-toasted crushed coriander seeds first, before adding oil in which to roast the potatoes for a good five minutes. It took about another five minutes to gently toss and turn all the other gradually added vegetables to release their flavors. Meanwhile, the bouillon was ready to be drained, so I could add it to the veggies roasting in the sauteuse.

Put a lid on it and simmer for about ten more minutes.

When the vegetables were still al dente, I laid the fish on top of the soup, replaced the lid and simmered the concoction for another ten minutes, before checking for doneness. the fish should have just turned opaque and flake easily. I used quite thick pieces of cod that had come to room temperature to cook through more evenly. I flavored the cod with a dusting of white pepper, curcuma [turmeric], and lemon zest, plus a little sea salt. To add a twist to the simple fish soup, I made a shrimp persillade topping for the fish. In a small frying pan, I heated some butter to which I added breadcrumbs, letting them brown carefully. Next came salt, garlic paste, and finely diced curly parsley, all the while mixing the ingredients vigorously before adding tiny, pre-cooked, shelled shrimp to heat up in the persillade.

Since it’s a little cooler this weekend, it’s definitely soup time again. As a means of recalling which combination of veggies, mostly, I’ve used to make this soup, I’ll just string some pictures in the sequence of use, adding a comment here or there.

The sweet potatoes were Honduran, while all the other veggies, as well as the bacon, were French-born.

Here we have the line-up of ingredients and the prep waste. Clockwise from top left: leeks and the thick ends of the carrots, some elderly potatoes, and the sweet potatoes [in cold water], olive oil, carrots and cubed celery root, garbage in a bio-degradable pseudo-plastic bag [merchants are no longer allowed to use actual plastic bags in our community. We don’t have a garden, so we can’t compost], bacon, seasonings, chopped garlic, and chopped onion.

The bacon is the first candidate to jump into the hot olive oil, closely followed by onions and garlic to be gently sautéed.

Next up are the celery and carrot pieces to be browned for a little while with the onion base, before I turn up the heat just so that I can dampen it with a splash of red Bordeaux, scraping up any brown bits, stirring vigorously before turning down the heat again. Now it’s time to add the secret ingredient I prepared earlier, Haricot Tarbais, white runner beans from Tarbes, Hautes-Pyrénées. This is the type of bean I usually use for my cassoulet. 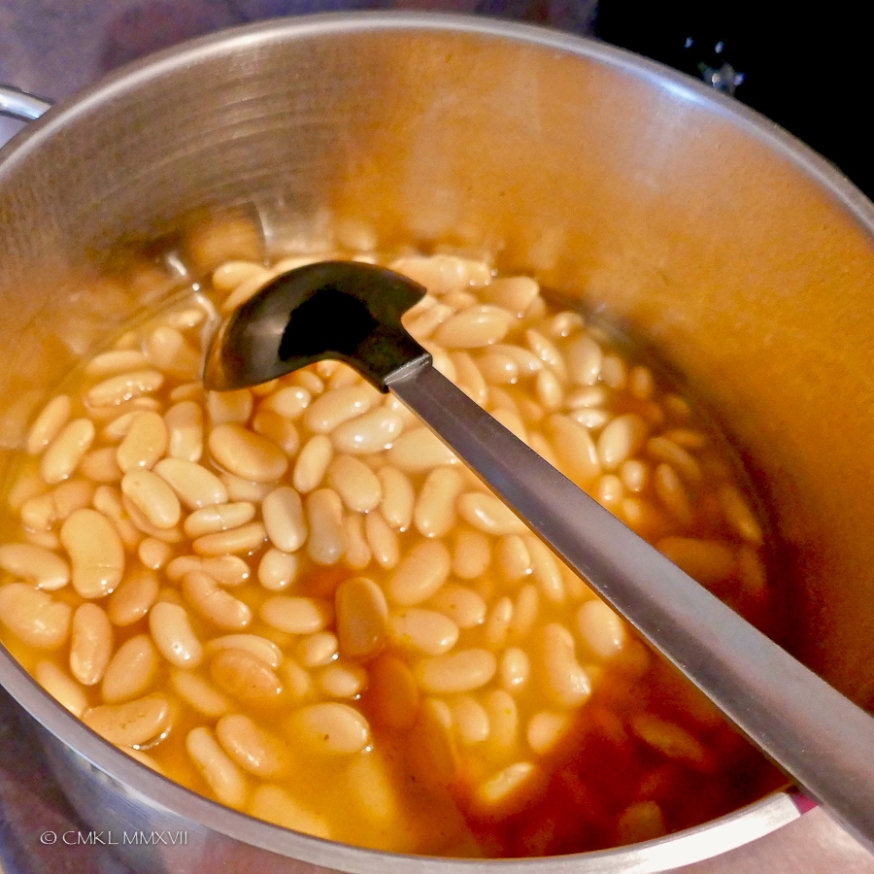 Truth be told, these particular beans were leftovers from the 2016 harvest and I’ve used them a few time as weights to “blind-bake” dough. Nevertheless, they are Tarbais beans and as such, even pre-owned, cook to a perfect al dente and are exceptionally flavorful.

All that’s left to do now is adding the remaining fresh ingredients, the seasoning, and water. 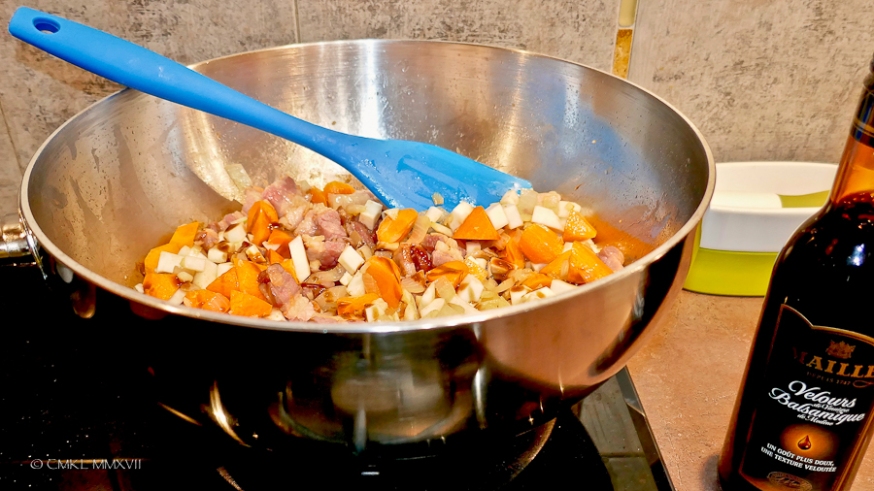 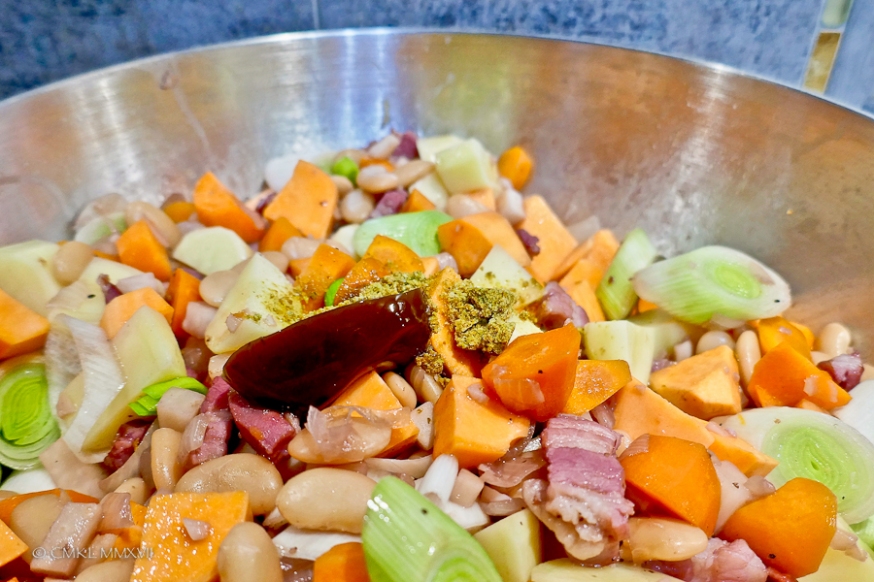 I’m lazy, so commercial bouillon work just fine for me

Note to self: next time, double the amount of sweet potato and use goose fat instead of olive oil.