My favorite French pastry is a gâteau opéra or opera cake, and my most favorite opera cake comes from the absolutely fabulous “Relais des Gourmandises” pastry shop, where Maître Artisan Chocolatier Maurice Mabillot whips up amazing sweets with his magical fouet. 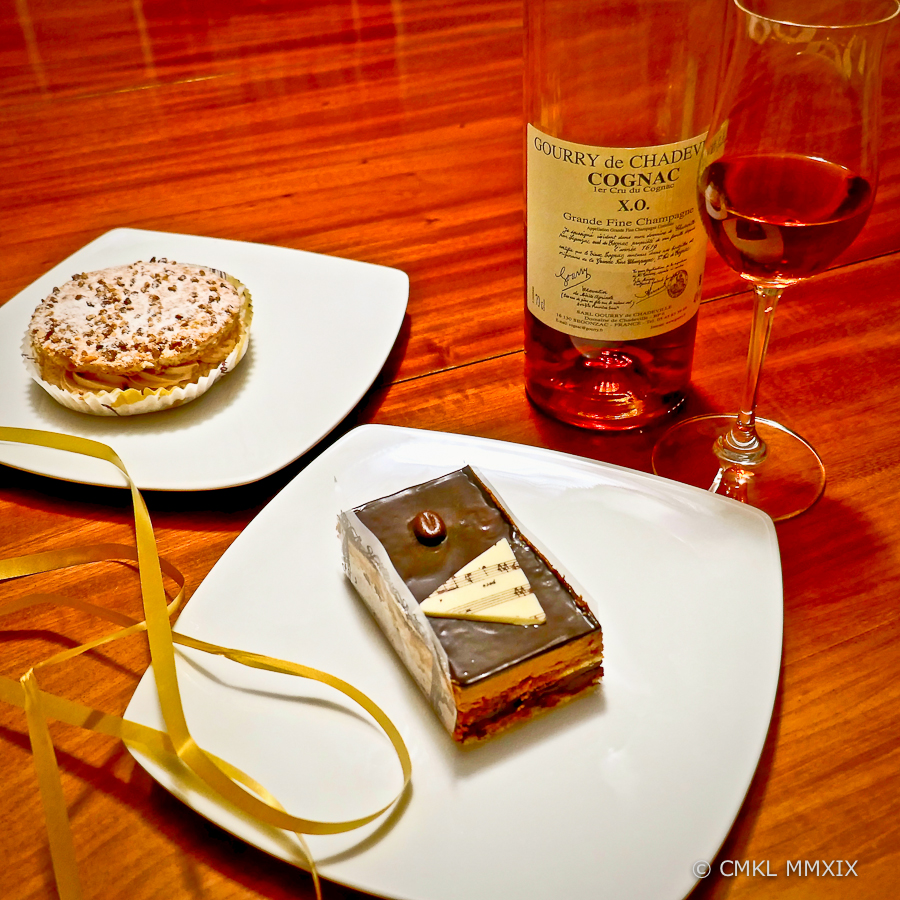 The Relais des Gourmandises is located in Matha, Charente-Maritime, roughly a 30-minute drive from our house. We hadn’t been in Matha for a chocolate fix in ages, so I called Mme Mabillot who runs the boutique to place an order for my beloved opera cakes, yes, in the plural, for a next day pick-up. It was a beautiful summer day, so before collecting the sweets, we strolled through Matha to the bistro in the main square where we settled on the patio in the shade of lilac trees for a beer and a glass of local white wine respectively.

At the Relais, madame had already boxed the telephone order and my husband had the tough task of selecting his own pastry choices. This poor, deprived man has never experienced the delight of opera cake because he, well, despises everything with a coffee aroma, imagine that! Fortunately, there is no shortage of baked goods in this country to compensate for his self-imposed culinary limitations.

It was a fairly quiet afternoon at the pastry shop, and to our surprise and delight, the maître and his wife gave us The Grand Tour through the business end of a pâtisserie boulangerie, a French bakery. The atelier was composed of four sections, each with its own tools and machinery, ovens and/or coolers, work surfaces, supply closets, and so forth. There was one area for bread making, another one for les viennoiseries, those lovely, flaky breakfast pastries like croissants or apple turnovers, followed by the area dedicated to the creation of fancy cakes like the opéra, Paris-Brest, or religieuse*, etc. Lastly, we were introduced to the atelier for “chocolates” as in les pralinés, les bonbons, les truffes, and, of course, the much-loved guimauves or marshmallows. It was amazing to see the workshop and learn a little about the highly specialized and intricate work of a chocolatier. Thank you very much for our tour, Maître et Madame Mabillot.

* With the exception of local baked goods, all French pastries & cakes have names and their ingredients are standardized. The quality of the ingredients and the talent, creativity, and expertise of the pastry chef determine if his or her efforts result in an average or a superb product.

The origin of opera cake is shrouded in the mists of speculation. Many people believe it was the highly respected chocolatier Maître Cyriaque Gavillon who created the multi-tiered rectangular cake in 1955 at the famous Parisian pâtisserie house Dalloyau. Legend has it that the richness of the pastry reminded Madame Andrée Gavillon, the master’s wife, of the sumptuousness of the Baroque-Revival opera house, the Palais Garnier, therefore she named it after the opera house. On the other hand, Maître Gaston Lenôtre, another globally famous Parisian chocolatier, chef, and all-around culinary wizard, claimed to have created the café-flavored cake in 1960, whilst the former daily newspaper “Le Gaulois” advertised a gâteau opéra already in 1899.

If one were so inclined, a subtle connection could be woven between Le Gaulois newspaper and the Palais Garnier, and possibly even the invention of a cake celebrating the opera house. You see, in 1909 and 1910 Le Gaulois published a story as a serial which was destined to become very famous indeed. Its author was one Gaston Louis Alfred Leroux and he called his story Le Fantôme de l’Opéra. The plot thickens! Since its publication as a book in 1910, followed by an English translation in 1911, Gaston’s Fantôme served as the storyline for a great number of films and stage productions, but the music of Andrew Baron Lloyd Webber gave this “Phantom of the Opera” the ultimate push into eternal stardom.

Leroux was a wild and adventurous guy, turning first to journalism and then to writing detective fiction after he had squandered an inherited fortune. He had a neck for finding himself in exotic locations during major historical events. For example, he witnessed the onset of the Russian Revolution on Blood Sunday, January 22, 1905, in St. Petersburg. Another affair Monsieur Leroux observed rather closely was the investigation into a secret prison cell in the basement of the Paris opera house, otherwise known as Palais Garnier which subsequently became the fictional home of his phantom. Who is to say, there wasn’t an entrepreneurially minded pâtisserie chef in Paris during these days of the fledgling Third Republic trying to link his cake to the most beautiful building in Paris and advertising it in the most popular daily paper of his time? Maybe the circle closed when those prominent 20th-century chocolatiers rediscovered the unsung original gâteau opéra, refining and standardizing it.

And while we are contemplating French chocolate creations, let us also remember the most typical and beloved of French chocolaty sins, la Mousse au Chocolat. My late brother Charles learned the art of making chocolate mousse at the tender age of seven at the knee of his maman d’été, his summer mama, in La Baule at the beautiful Côte d’Armour in Brittany. I have carried his recipe around with me through continents and decades, yet I never prepared the dessert until early last Saturday morning, when I decided to pull out the kitchen machine and whip up his mousse for our lunch guests. Not entirely “his” mousse, as I worked in my own little twist by omitting one of the ingredients, heavy cream, while adding a new one.

There are a few principles to consider in this preparation. The bowl in which you beat the egg whites has to be very clean, fat-free and cold to achieve a large volume of foam with stiff peaks. The chocolate has to be fluid but not so hot as to curdle the egg yolks. Sugar takes a long time to dissolve, be patient. Mousse au Chocolat is a heavy dessert. Small portions are just right and won’t overwhelm your guest’s stomachs. The mousse could be decorated with a few crystals of fleur de sel or a whipped cream rosette just before serving. The recipe serves six comfortably.

* The addition of Espelette chili granules to Charles’ recipe was a spontaneous decision last Saturday morning. It added a nice kick to this sweet dessert and I believe my brother would’ve approved. It was, however, not an original idea. Some twenty years ago, I discovered the sweet-and-spicy creations of the chocolatière Katrina Markoff, founder of Haut-Vosges Chocolats, who put her creations on the map pairing them with flavors like wasabi, paprika, Mexican chilis, and more. Besides, the combination of crystalized ginger with dark chocolate has been a traditional favorite among sweet lovers for centuries.