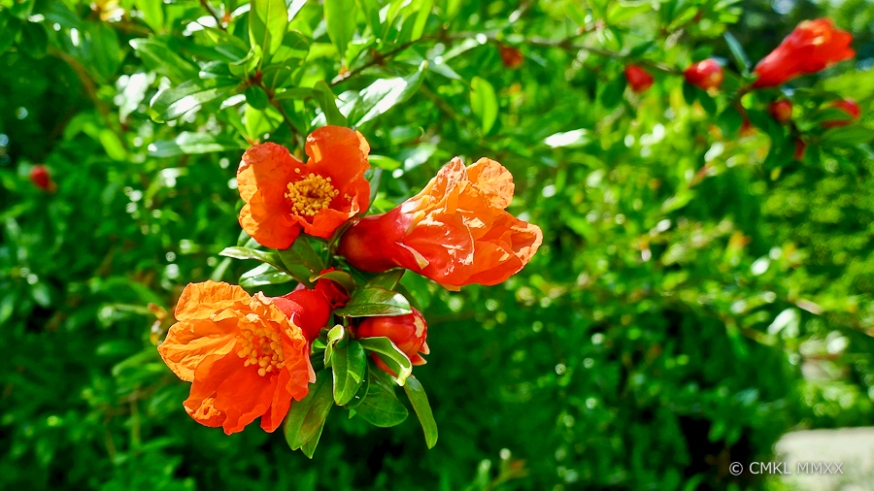 Although Eve’s forbidden fruit is often depicted as an apple, ein Apfel in German, it may have been, in my considered opinion, actually ein Granatapfel, a pomegranate. If we could go 5000 years back to the Sumerian town of Uruk, we would come across the temple of the protector of Uruk, the Goddess Inanna*. In the Mesopotamian creation myth called ‘Inanna and the Huluppu Tree’, and in the myth of ‘Inanna and the God of Wisdom’ one finds the earliest known stories relating to the origin of mankind and its thirst for knowledge. The Huluppu which caused the Goddess Inanna quite some trouble was a pomegranate tree and in the intertwined myth, she stole the gifts of knowledge and culture from Enki the God of Wisdom, while he was drunk [maybe on pomegranate wine?] and impuissant against her charms.

As I briefly mentioned in a post of August 25, 2019, our rather unruly little garden is home to not just one but several pomegranate bushes of at least two different varieties. 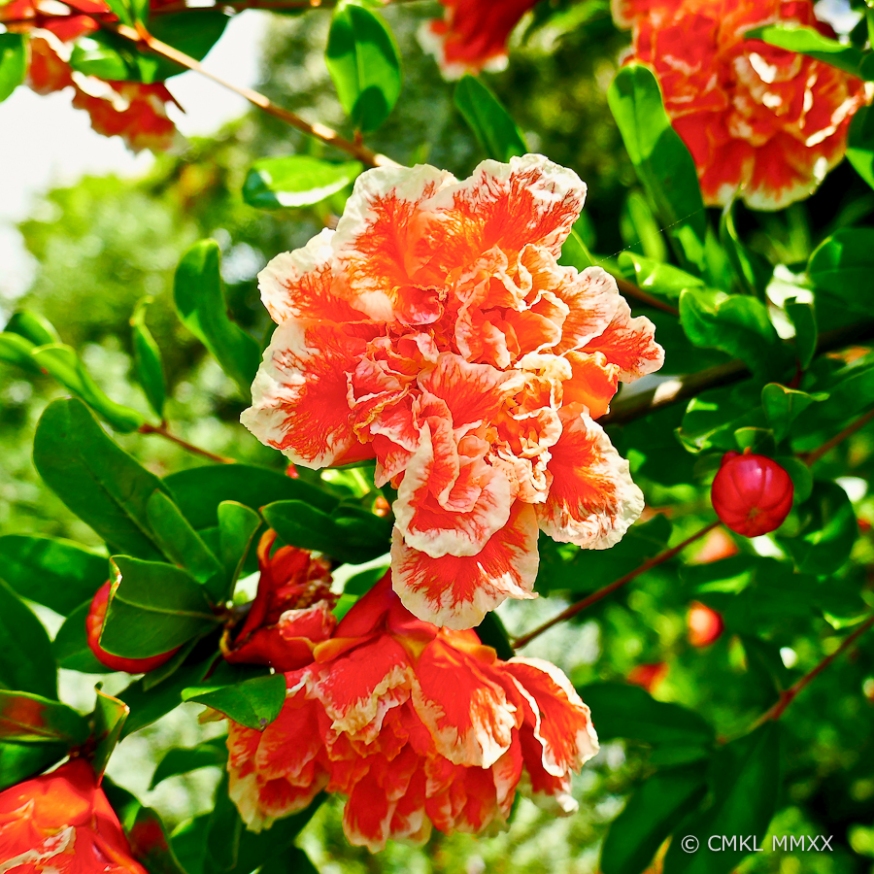 The Provence grenadier was the bush we discovered last year, thanks to its striking bright orange-red flowers.

The others either bloomed extremely discretely or not at all that year. By mid-July, 2019, the flowers on the bush above began to set to fruit, a process that took about a month to complete. 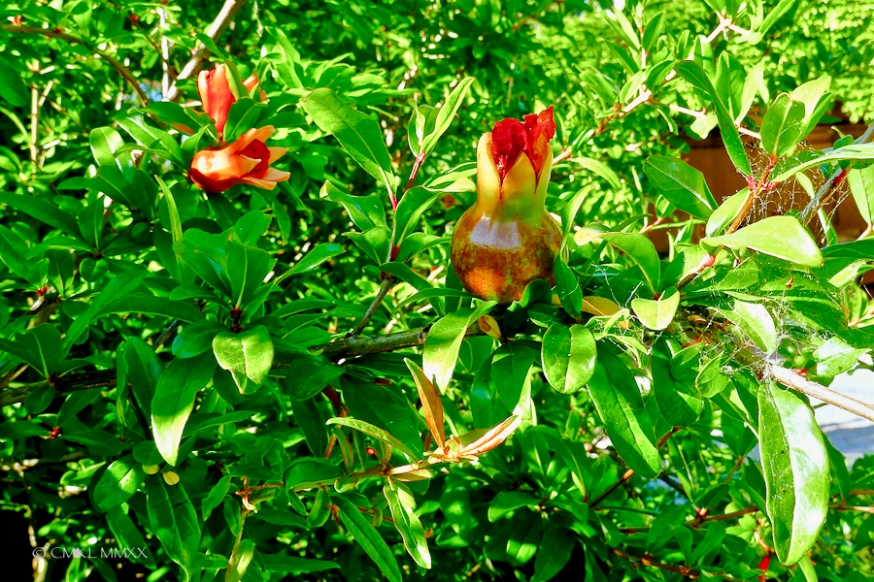 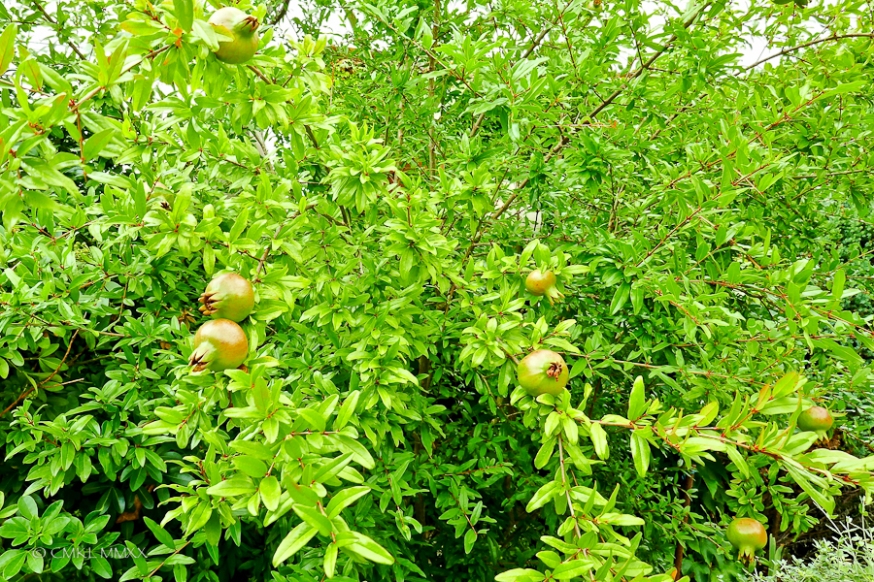 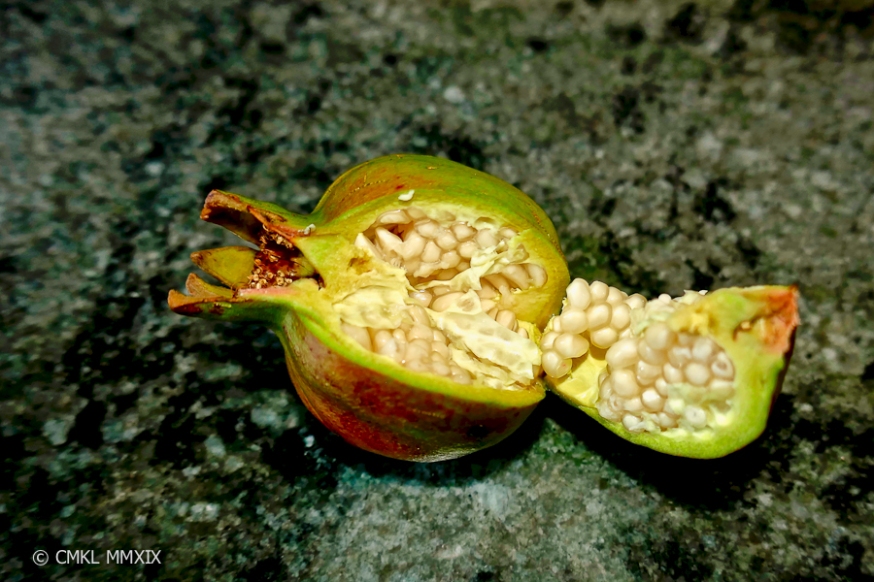 The first test in late August. Yes, the berry is filled with seeds.

Waiting for the fruit to ripen to learn if our Granatäpfel might be edible took several months. Fortunately, a road trip to Helsinki and the Baltic countries [check it out in my TRAVEL blog] saved me from the nail-biting excitement of watching fruit grow for the entire month of September. But as soon as we were back, I couldn’t resist to open up one of the pomegranates with a split pericarp, its outer shell.

The majority of seeds was still quite pale. 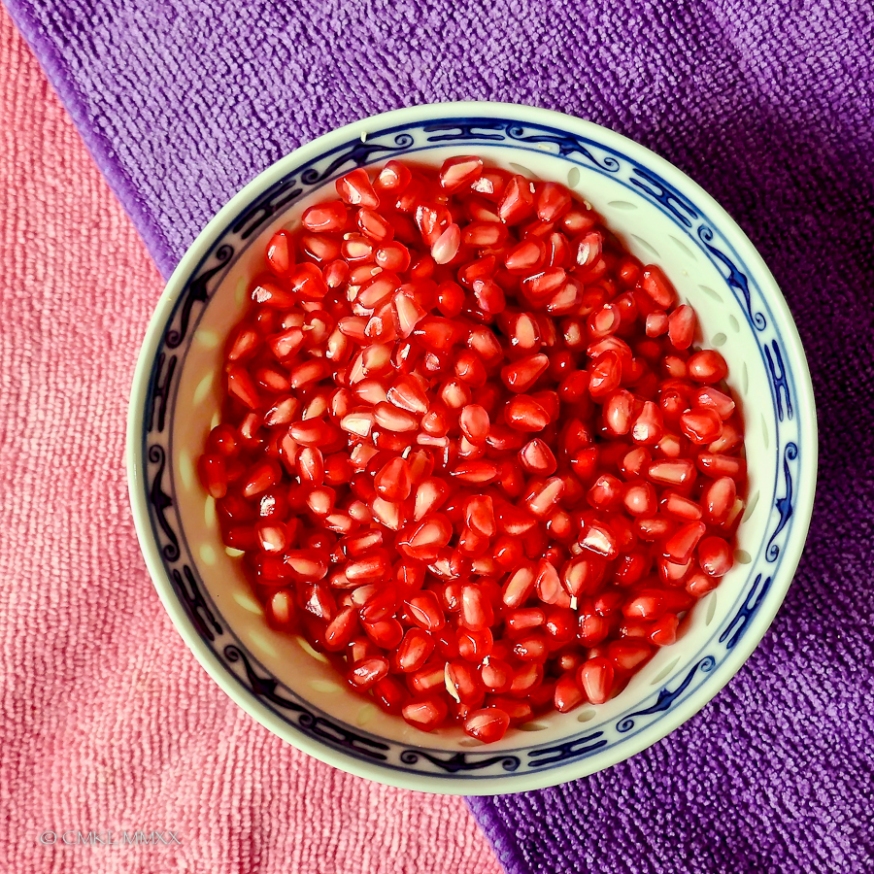 Although the appearance of both fruit and seeds was typical for pomegranates, they were quite a bit smaller than the usual commercial varieties and they were very, very astringent. I thought they might need more time to mature, so I gave them another three weeks before I collected a few more of the fruit that had already fallen to the ground – with exactly the same result, inedible sourness.

I used a few as garnishes, but it was just no pleasure to eat something evoking the furry feeling in one’s mouth of biting into an unripe banana. Within the next fortnight, it was time to try the pomegranates one last time. Before the announced arrival of our first November storm, I went out to harvest the last of our berries.

They hadn’t changed in color or size, but I was hopeful! A few of the prettier ones were allowed to show off in a fruit bowl near the radiator in our dining room on the off chance indoor living might kick-start their sugar metabolism. 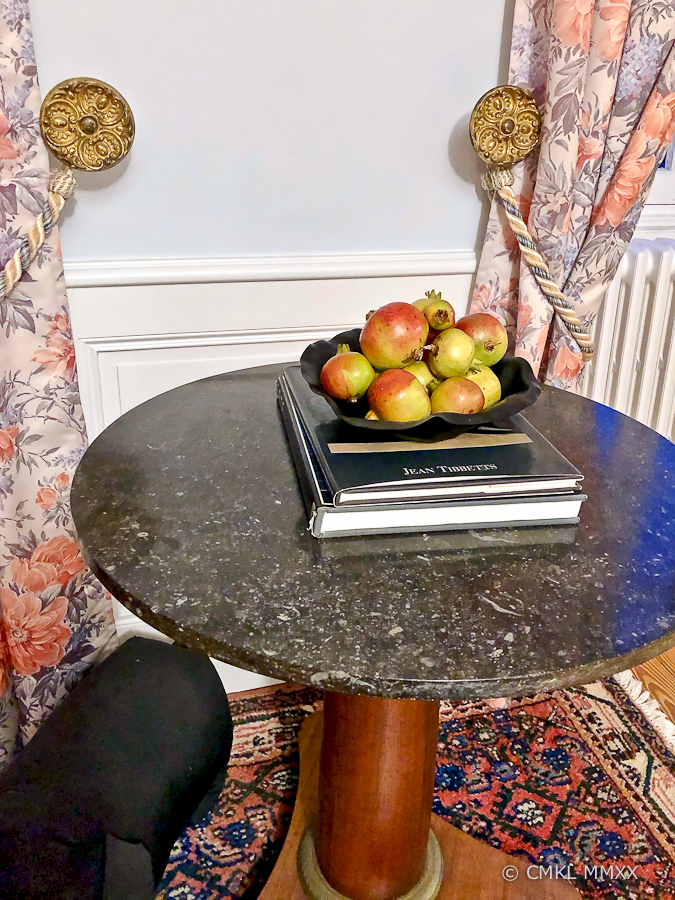 If you think that hulling the seeds from a commercial pomegranate is annoying, you’ve never done it with the tiny seeds in an undersized variety – it took me practically forever!

But eventually, my kitchen machine and I extracted nearly 0.8 l of pomegranate juice from our home-grown berry seeds. And what a mess it was!

I like tart fruit, especially my all-time favorite, maracuyá, the Costa Rican passion fruit. There, I would successfully offset the astringent tendencies of maracuyá juice with honey. When I attempted to do that last November with my pomegranate juice, I failed completely. Even after I added sugar syrup, the juice never turned into a product one might like to enjoy with yogurt and cereal, waffles, or, quite frankly, anything else. I tried to use the juice as a flavorful ingredient for sauces and reductions but never achieved any better than so-so results. Once, having made a spicy sauce to dress an Arctic Char filet, my dinner companion remarked that it looked like blood. Not what I had in mind.

With the onset of pandemic confinement in March, I poured the remaining pomegranate juice done the drain – we needed more space in the fridge for actually usable food. Case closed.

A much more successful preparation turned out to be Saturday’s lemon-butter sauce for some pathetically thin frozen salmon bits. Owing to our continued self-isolation, we buy more frozen than fresh food, including fish. The frozen salmon wasn’t bad at all, just thinner than a lovely slice of fresh-caught wild salmon would be, and therefore it cooked much more quickly. One has to be ever vigilant not to overcook those skinny little filet pieces.

SALMON with CUCURMA-LEMON-BUTTER for two

Select the desired number of Salmon filet [preferably wild-caught salmon, not that terrible farm stuff], season the fish with white pepper, cucurma powder, lemon zest, and dill. Allow the fish to come to room temperature before cooking [at least 10 min]

Melt the butter over medium heat without browning it. Turn up the heat a little and immediately and carefully add the salmon filets. If you use skin-on filets, brown the skinless side first. Sear one minute in the butter, turn the filets over and sear another minute on the other side – two minutes for skin-on – while basting with the sizzling butter. Turn down the heat and remove the filets from the pan to keep warm. I had baked a potato-onion gratin as a side dish which I kept warm in the oven, so I put a covered plate with the salmon in the warm oven. To make the sauce, add the wine or the bouillon to the pan, increase the heat, and reduce by roughly one third. Add the zest to the boiling sauce, stir for a minute, add the lemon juice, stir and keep the sauce boiling. Slowly add the cream while stirring and continuing to reduce the volume. As the sauce thickens, finish it with salt, cucurma, and dill to taste, and, if desired, another dollop of butter.

When you’re satisfied with the creamy consistency of your sauce, turn down the heat to medium-low, adjust the seasoning, and reintroduce the salmon to the pan to reheat. 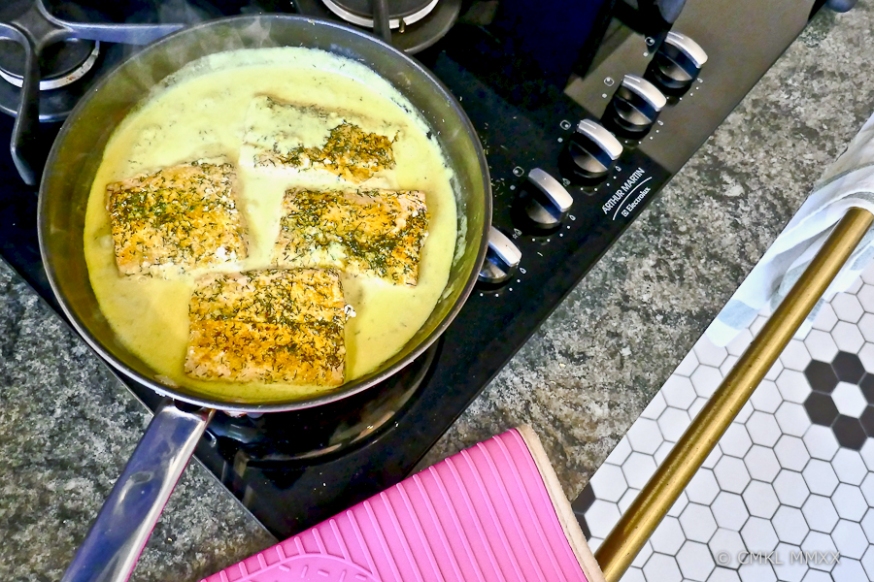 If your filets are quite thick, you may have to cover the pan and give them a couple of minutes to finish cooking so that the center turns opaque. Voilá, that’s all! 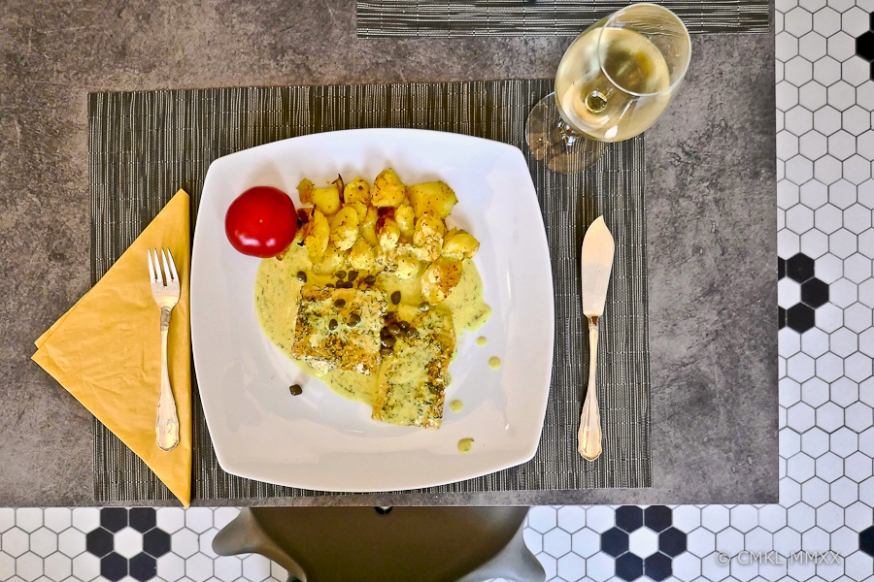 For my serving, I compulsively add capers to all egg or fish dishes. Also, I would have added a half-a-teaspoon of anchovy paste to the melting butter, in the beginning, to emphasize the deepsea aroma of the fish – had I thought of it at the time.  The wine, both for cooking and drinking was a UBY Nº3, Côtes de Gascogne, a summer wine composed of ugni blanc and colombard grapes, crisp and refreshing but assertive enough to balance the creamy sauce and the distinctive salmon flavor. Bon Appetit ! 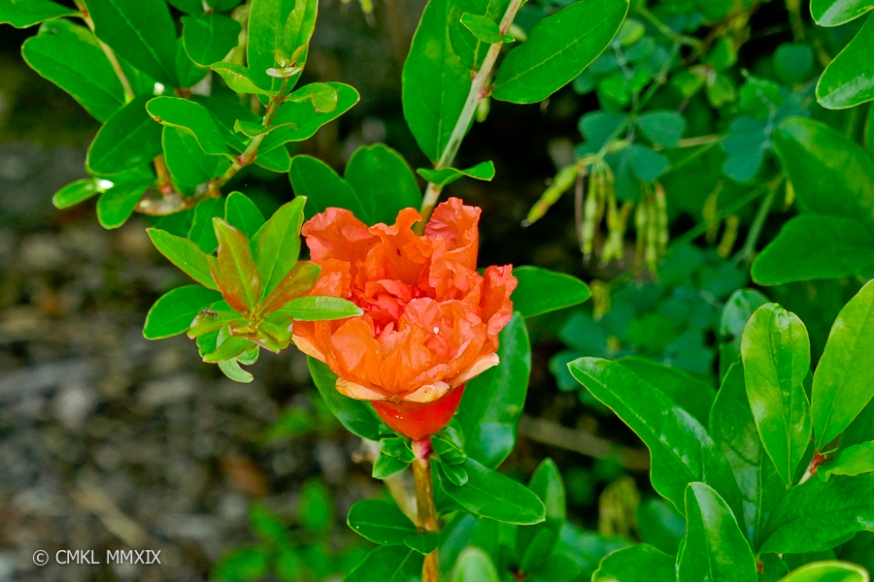 *Inanna material based on:

“Goddesses, Elixirs, and Witches” by John M. Riddle and

“Inanna” by Joshua J. Mark in the Ancient History Encyclopedia