When we moved into our new home in April, our green space, a courtyard garden between the house and the street had been maintained only in minimal fashion for some time. The previous owners had long moved to Spain and stayed in Cognac only sporadically. It fell to a neighbor and avid gardener to do the most urgent tasks whenever he could. Since he knew the garden so well, we had arranged with him to become our gardener of record. But soon after we moved in, he fell ill and outside of two brief sessions, he was never again able to continue the necessary work.

Throughout the summer, always hoping he might be able to return, we watched the already unruly plants get completely out of hand. the vines grew over the barn shutters and invaded gutters and soffits, threatening the integrity of the tiled roofs of the barns. The poor cypresses drooped every which way with heavy loads of cones, and the mushrooming rosemary population proliferated beyond reason. It was high time to take action!

On the dot of eight on a greyish morning, a three-man crew of the “Thomas Espaces Verts” garden maintenance company arrived with their heavy equipment. 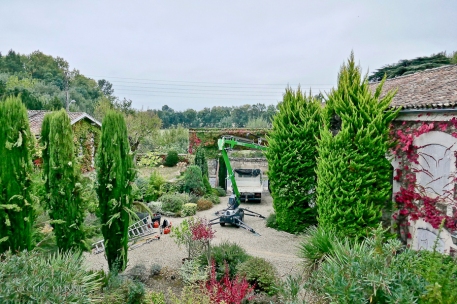 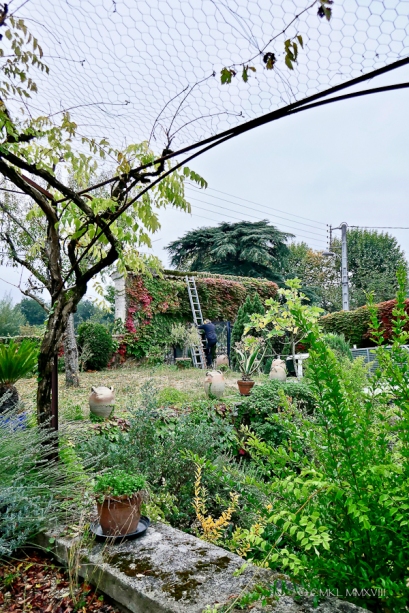 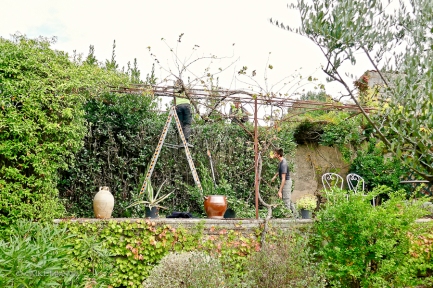 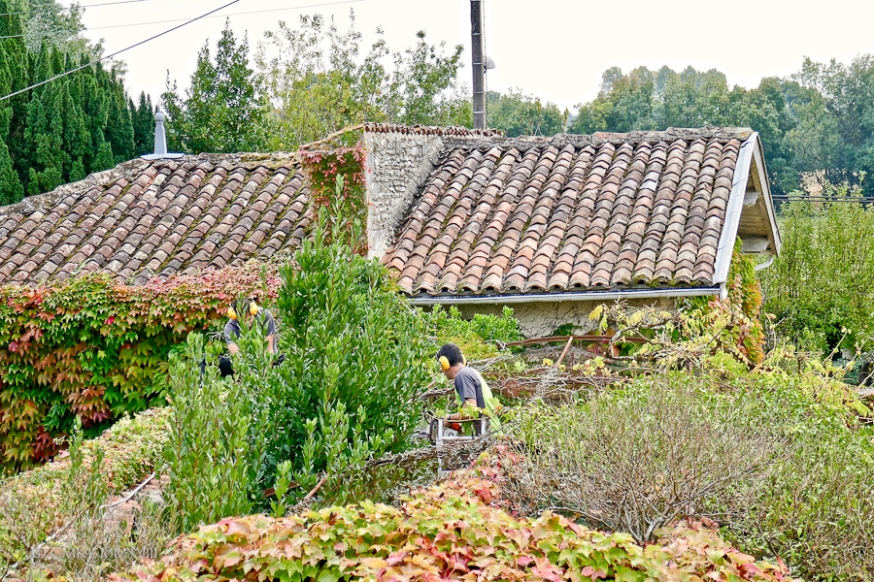 Some of the work was quite precarious, especially at the laurel hedge along the wall to our neighbors. It had grown through the mesh cover of the pergola by several feet.

Trying to scrape the vine tentacles off the white façade – with partial success only.

By 16 hrs, the job was nearly done and the agile monitor lizard went back on its trailer pad. 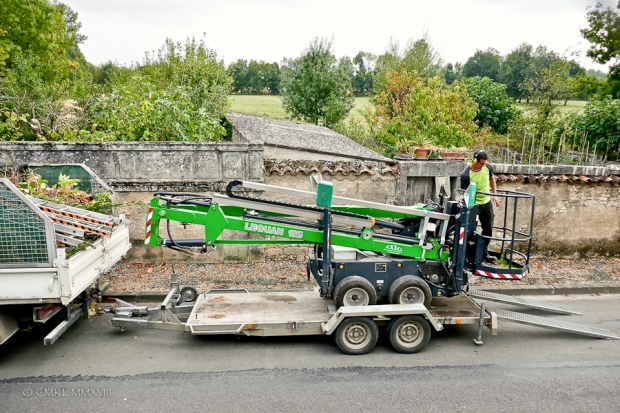 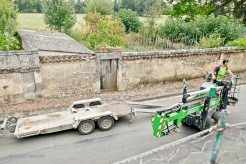 That left only the clean-up of bits and pieces which the guys accomplished with the same professionalism they had shown all day, aided by leaf blowers and rakes, before driving off into the sunset.

They were actually driving in an easterly direction, but that just doesn’t sound right, does it? 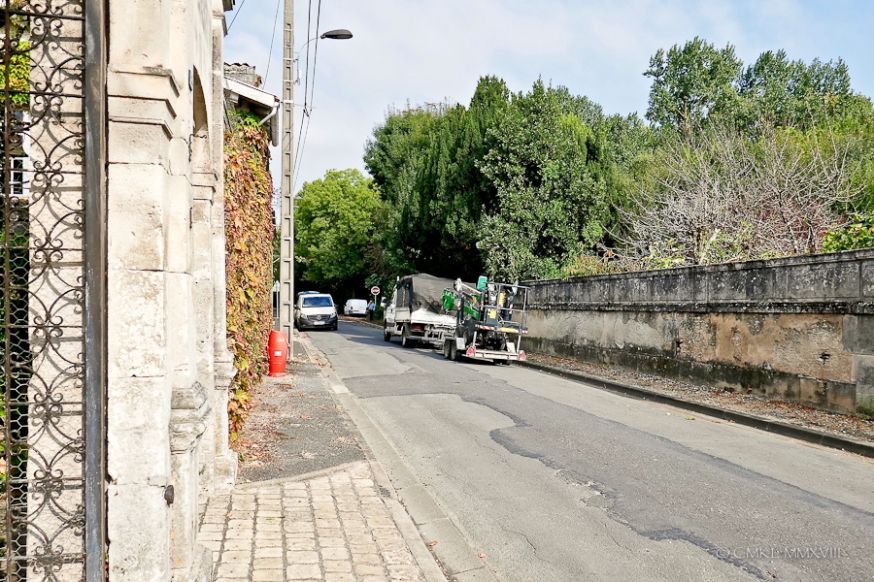 Meanwhile, in the house, some cooking was going on. Since we both like hearty soups and I am a smidgen lazy, I usually steam fish with fennel and capers as the last step of preparing a stew. For some unknown reason, this time, I decided to bread the fish and pan fry it. I don’t like breaded food, mostly owing to the unnecessary calories, but I have to admit that it can be delicious. When I was much more slender and so young that I naturally believed I would remain slender forever, I used to get a bagful of those deep-fried breading tidbits that the Long John Silver chain used to sell. Oh, those frivolous days of yonder!

The recipe I was planning to use for the breading called for the egg dip between the flour and the crumbs to incorporated crème fraîche. Talk about calories!! What most intrigued me, though, was the idea to mix the breadcrumbs with fresh dill. A great starting point for a flavorful breading, I thought.

So, what are we cooking, then? Pollock or saithe or coalfish, that’s what we’re cooking. Pollachius virens, Gadidae, called lieu noir here in France. We’re also going to have skinny green beans with red onion & garlic & ginger confit, plus some peppers & dried tomatoes for color.  And, an accidental side dish, satiny mashed potatoes.

Here we have the potatoes which, after being started in cold water with a vegetable bouillon cube & salt, will be boiled for 20 min with a Tbl of the diced garlic.

Dill & lemon zest will become part of the breading

clockwise from top: nutmeg [for the potatoes], lemon zest [for the breading], marinated dried tomatoes [for the green beans] 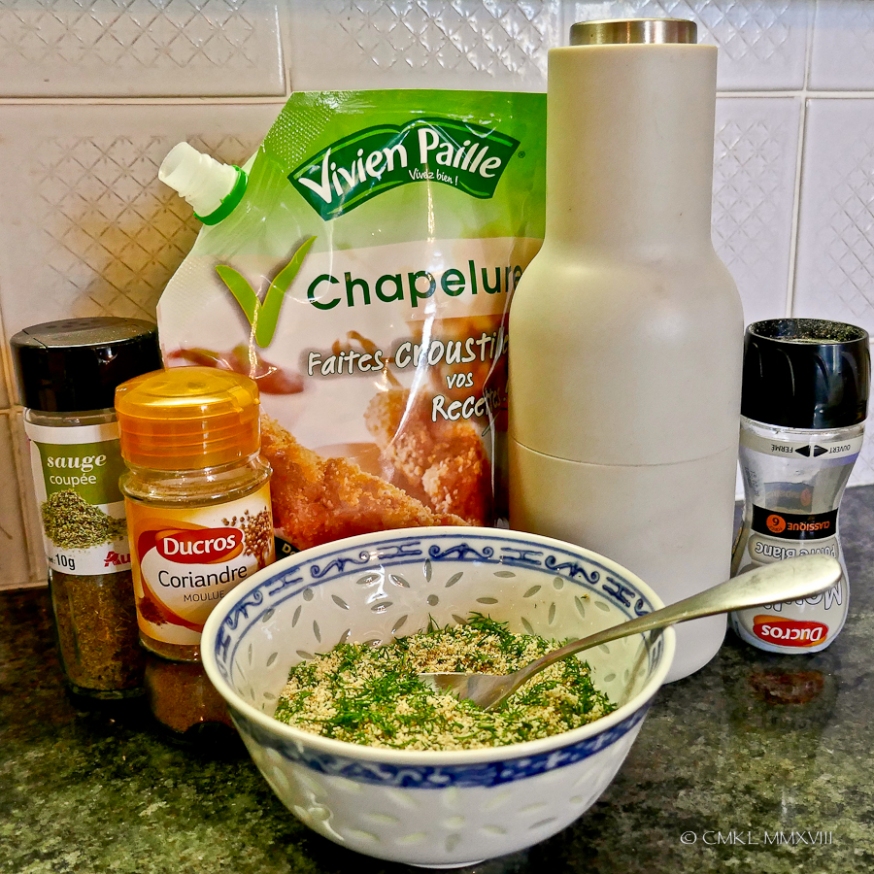 Breadcrumbs with salt, white pepper, powdered coriander, dried sage mixed with 2 Tbl of fresh, chopped dill and the zest of a smallish lemon.

Before stirring 2 heaped Tbl (!) of crème fraîche in the egg, I added a little anchovy paste to enhance the overall flavor

The breaded lieu noir should rest in the fridge for 15 min [or longer] to let the breading adhere to the fish for frying. Meanwhile, one can look after the beans and their aromatic confit. 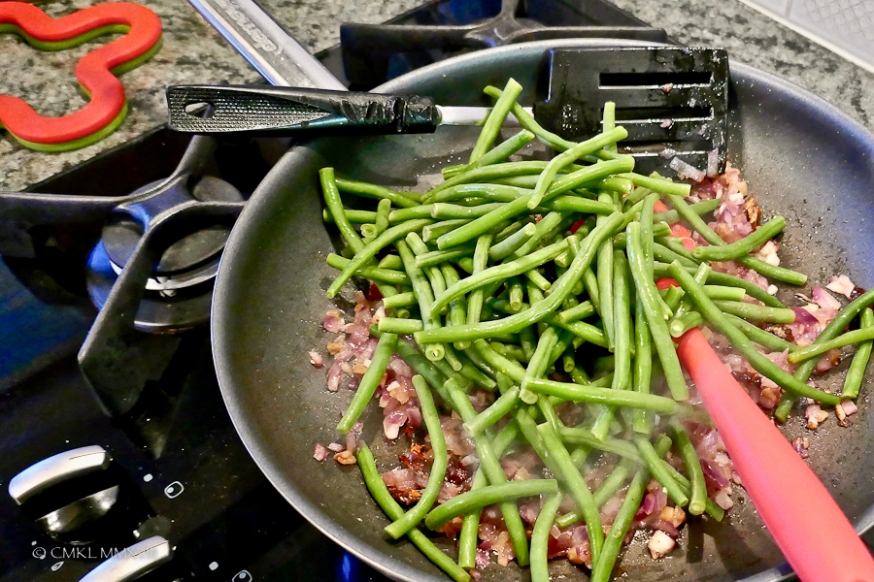 Our other side dish, the mashed potatoes truly were an accident. My original intent was to mash the boiled potatoes with the “stick” attachment of a hand-held mixer, a weak immersion blender, as I believe they’re called. Only, the darn thing wouldn’t work. Well, the mixer worked perfectly fine, but I couldn’t open the sliding shutter covering the stick attachment site. The stubborn plastic thingy plain refused to slide further than halfway. Neither could I find the mixer manual in the drawer specifically designated to hold the manuals of all our large and small appliances. All of them, except the Bosch hand mixer, apparently. Lengthy search-and-rescue missions for operating instructions while hot potatoes wait for action, any action, and another dish awaits stirring, isn’t such a hot idea. So I tossed the mixer back in the cupboard in disgust and poured the potato pieces with a little cooking liquid including the garlic bits, the nutmeg, a dollop of cream & butter, and some crème fraîche in the blender, where it turned into this incredibly smooth and silky potato cream. Sort of like soft serve ice cream, only hot and potatoey. 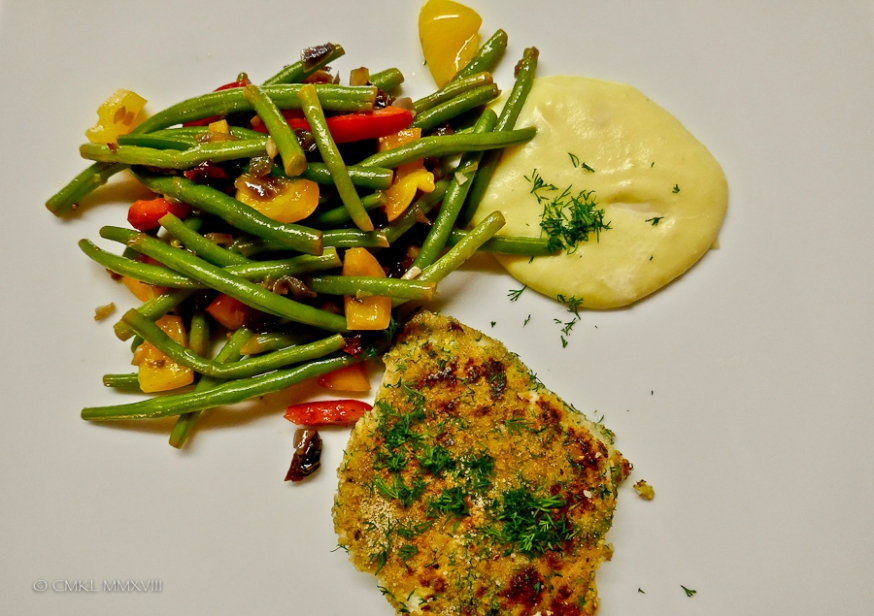 At least, nobody can say it’s monochromatic 😇