In France, an anniversary, true to its linguistic roots, means an annual celebration independent of the nature of the event. Therefore, our anniversary would be called an “anniversaire de mariage” or Hochzeitstag, if you prefer.

For the past few years, we’ve made a point of celebrating our wedding anniversary with a meal in a Michelin starred restaurant. Since this year’s anniversary was definitely a biggy, signifying that we had been together since the dark ages, a two-star restaurant was in order, don’t you agree?

The husband did all the research to find just the right place for this year’s jubilee. Our wedding date of December 28th, however, posed a challenge in his selection process because many French restaurants are closed from Christmas Eve to New Year’s Eve or Saint-Sylvestre which is a huge night out for French adults after the largely family-oriented celebration of noël. Most restaurants in our town, for example, close for a few days for family time and in preparation for their extravagant St-Sylvestre menus, reservations only [well in advance], often with live music and dancing. But my guy is an accomplished internet researcher, and he found just the place for our very own special night out.

A serious concern, however, was the upper respiratory infection I contracted mid-December. Although I felt much better by Christmas, we were holding our collective breaths waiting if Barry would get sick also. Additionally, our heating crashed on us twice in the span of three days during Christmas week, so that we had to deal with 14ºC/57ºF in the house, not too much fun for someone with bronchitis. Fortunately, Barry didn’t get sick, the boiler was repaired and we happily packed our bags for an overnight in La Rochelle. We stayed at the Chambres d’Hôtes Eden Ouest, a B&B in the center of town. In this charmingly restored 1745 townhouse, in which we occupied a large bedroom with a comfortable bed and a huge ensuite bathroom sporting not only a wooden tub from Austria but also the most delightful steam shower. Fabulous treats for these old bones!

In the evening, we took a cab to the restaurant since it was a rainy side, arriving at the appointed hour at the Christopher Coutanceau for a remarkable experience in fine dining.

Once we were settled at our table, we could take in our surroundings and enjoy the ambiance of the contemporary space. “Wave action” wall designs and intricate lighting systems highlighted the restaurant’s coastal location and the chef’s grounding in all things pertaining to the sea.

While we sipped our half-bottle of Bollinger special cuvée Champagne with the amuse-gueules, we studied the menu and dove with great anticipation into the unfolding drama of a performance designed, it seemed, uniquely for us.

We discussed our options and choices comparing the menus presented to us in two different languages. It was pretty funny to read how certain foods or preparations were worded in either French or English. Another, equally important decision related to the wine selection. After consulting the sommelier, we selected a bottle of Côte de Beaune, a southern Bourgogne Chardonnay, an aromatic wine of character which we were assured would stand up well to the strong flavors of our seafood dishes, followed by a half-bottle of the Provençal Bandol AOC for the meat course. We enjoyed Bandol Rosé all through the summer months and were curious about the red Bandol, with its four grape varieties of Mourvèdre, Grenache, Cinsault, and a smidgen of Carignan. Both wine selections turned out to be delicious.

Our first course was a type of seafood which, as highly praised as it is in Asturia and Galicia, we had never tasted before. Gooseneck barnacles. 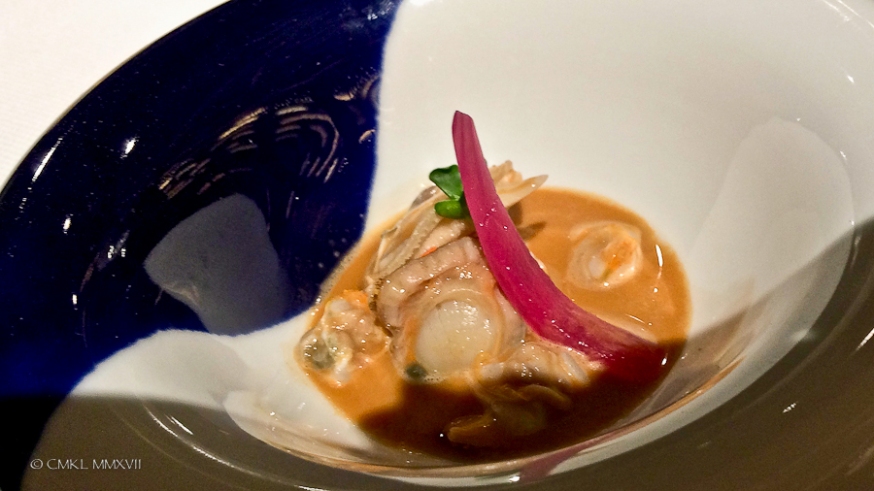 Granted, pretty they are not, but they are tasty, particularly in this preparation. There is a funny story in Wikipedia telling about the origin of the barnacle’s common name. Goose or Gooseneck barnacles are sessile crustaceans in the Order Pedunculata living on driftwood, rocks, boat hulls, whales, and so forth. The well-known cleric and historian Gerald of Wales [1146 – 1223 more or less], living during an age when the avian habit of seasonal migration was not yet widely known, postulated that the brant goose [Branta leucopsis, Anatidae] derived from barnacles because no-one had hitherto seen these geese hatch in the British Isles. This unfounded wisdom found its way into common lore so that to this day the bird is called barnacle goose and the crustacean goose barnacle. Nonetheless, there was one medieval detractor of the cleric’s hypothesis, the Holy Roman Emperor Frederick II [1194 – 1250]. The emperor dissected innumerable barnacles and never once found a goose embryo within. Not surprisingly, being the scientifically minded scholar he was, he declared the goose-from-barnacle story balderdash. It is not known if he ever ate a goose barnacle. I’m sure you understand, why this biologist emerita regards Frederic II as her favorite emperor.

We were a whole lot more familiar with the seafood served subsequently, featuring two different preparations of Coquilles St-Jacques or scallops, lobster, and John Dory. Without any doubt, the star of our first scallop dish was the highly prized seasoning called a truffle.

Our plates arrived displaying a circle of sliced scallop carpaccio, decorated with little dots of truffle essence. The white-gloved Master of Truffles then shaved a generous amount of truffle, burying the delicate scallop slices under the fragrant aroma of winter truffles.

After the truffle shaving action, our waiters poured some more truffle essence in a circular motion around the scallop and truffle arrangement.

Comparatively speaking, the second scallop dish lacked preparatory drama – but certainly not any flavor! Seared diver’s scallops are among my most favorite foods.

Drama returned in full force with the presentation of our next plate, presented to us in concert by two waiters like a synchronized water ballet performance.

Without a doubt, this was the unbearable lightness of being lobster. May Kundera forgive me for borrowing his and Nietzsche’s theme, but this dish had the flavorful weightiness and density in texture, as well as a delicate lightness in the form of a foamy, enveloping cloud pulling together the sublime arrangement of textures and aromas upon which this dish depends and these gentlemen expounded so eloquently – if not necessarily in regard to food.

Even the bread service turned into a performance. A waiter came around with a pushcart laden with baked goods. There were individual buns in a variety of flavors and loaves of yeasty, crusty creations fresh from the oven. The Bread cart was followed by the butter maid – actually it was a guy, but, heck – offering a choice of sweet butter, demi-sel, or salted, plus a selection of herbed butter.

And speaking of salt, this was the salt cellar on our table. I had to ask what it was because its function was not readily apparent. At first, I thought it was just a tchotchke, but the iridescent globe hid an indentation with a small opening in its bottom through which the salt was dispensed as you shake the pretty glass bowl. Clever!

John Dory with a roasted octopus arm, an artichoke, and a squid-ink noodle thingy.

After the fish courses, we switched to the Bandol to accompany the meat course, venison from the Alsace region. The deer meat had been marinated in red wine for 24 hrs and was rich and tender. 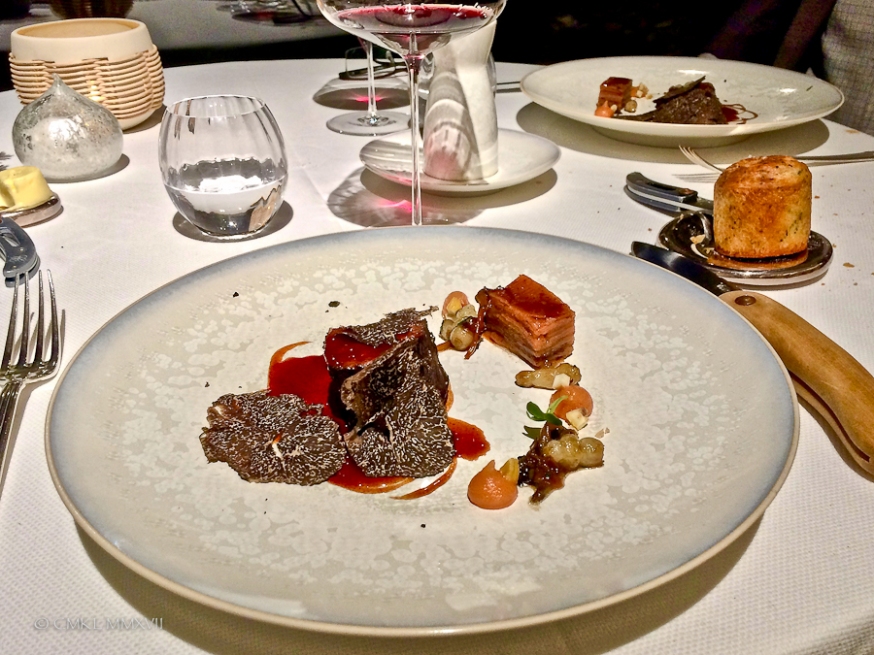 Of course, the venison, being a typical winter dish, was enhanced with the ultimate winter flavor, truffle.

This venison dish was not just flavorful and tender, but also reminiscent of our years on El Rancho Leon in Central Texas. Living in the heart of Texas for ten years, we never consumed store-bought meat. We only ate what our land provided. Since I didn’t trust my markswoman’s skill beyond rattlesnakes and feral pigs, we asked our bow-hunting friend and neighbor to harvest deer for us, splitting the meat between our families. Even though quite frankly, there is nothing tastier than Axis [Axis axis] backstrap, this was darn good!

We concluded our meal with a succession of desserts, beginning with the most beautiful little caramelly concoction. It was a Caramel and Cognac sorbet with Jonchée [local Saintonge “Quark” or fromage blanc]. You see jonchée in market stall around Saintes, so I was familiar with this fresh cheese specialty, albeit not in this unique transformation! 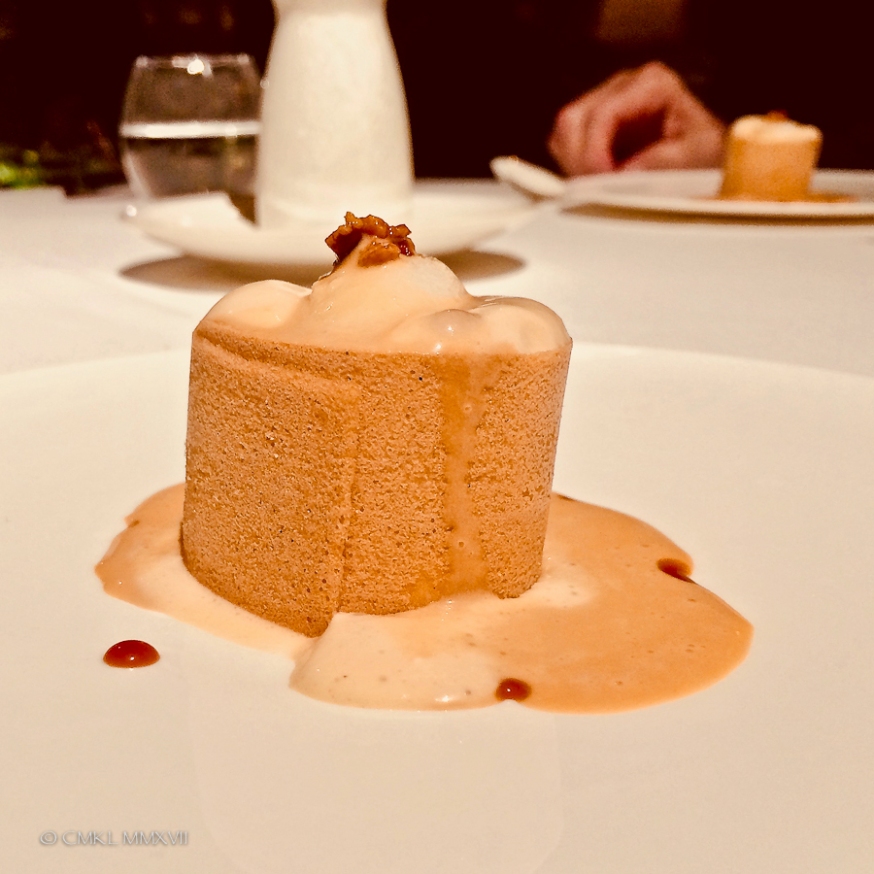 The creamy-rich caramel sorbet was followed by a thyme flavored lemony lemon sorbet with a crackling lemon shell. 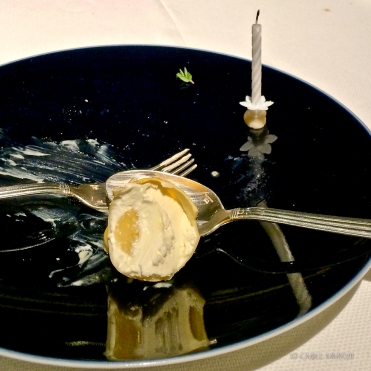 The almost overwhelmingly lemony heart of the crunchy lemon dessert. 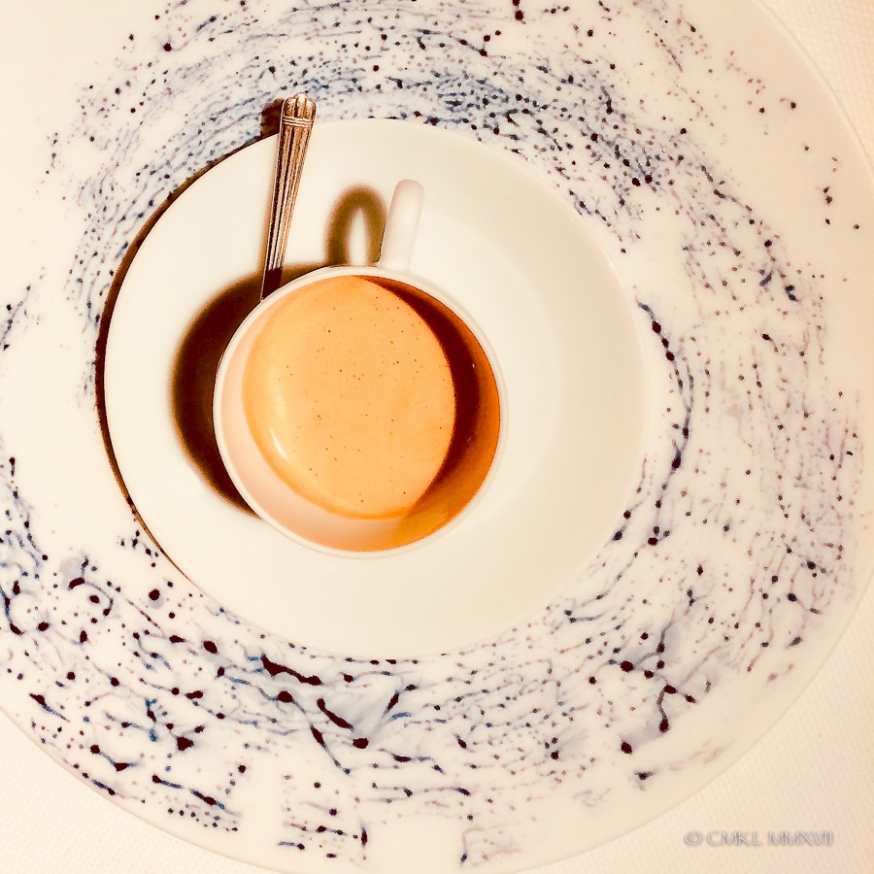 After more than three hours of indulgence and debauchery, we eschewed a taxi, bravely walking back to the hotel through the gentle mist of the late December night. 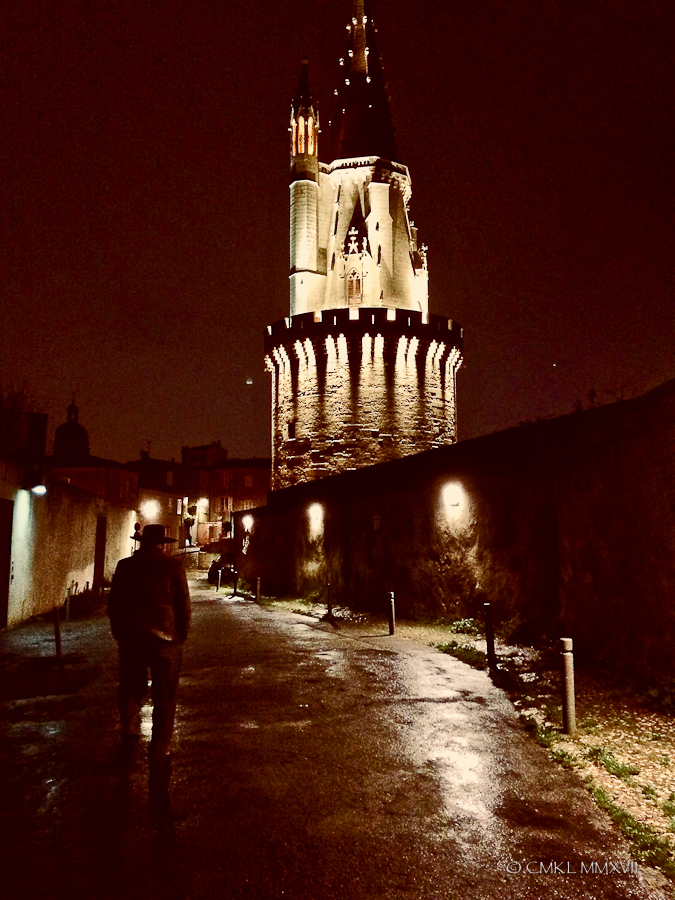 With rain-soaked hair and moisture-dripping glasses, it is no wonder that this good-night selfie turned out a bit fuzzy 😎

5 thoughts on “Our 40th Anniversary”