We left France recently for our first trip back to Costa Rica in 20 Months, más o menos. The contrast between small town Saintes, Charente-Maritime, and small town Atenas, Alajuela, couldn’t be more pronounced if you tried! With a few of the pictures I took during this last week, I can illustrate the dichotomy between the tranquil life along the Charente river and the dramatic natural forces on the slopes of the Cordillera Central.

On our last day in Saintes, I discovered “our” swans on an outing with this year’s crop of cygnets. Framed against the backdrop of 2000-year-old l’Arc de Germanicus, they are the perfect symbol for life in rural southwest France.

While I was watching, the parental units brought their swanlings a little closer to the left bank to teach them the swan-ly skill of underwater grazing. 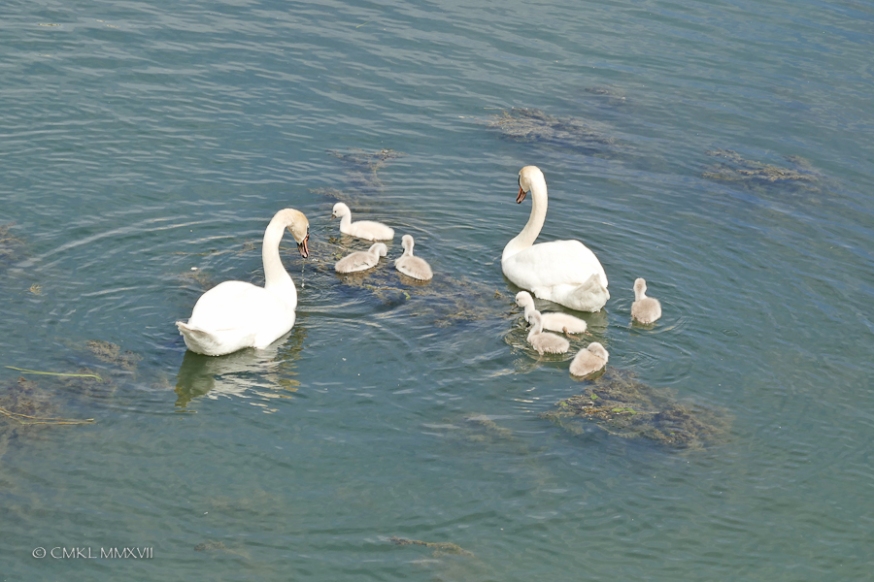 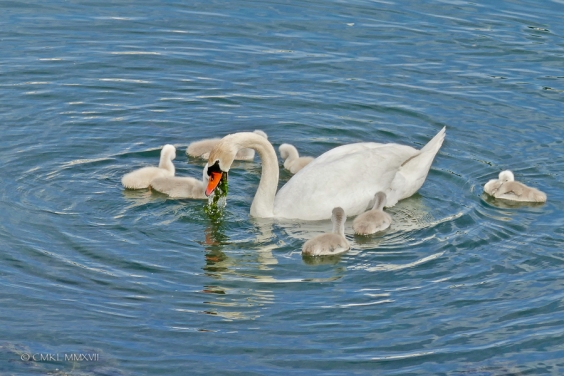 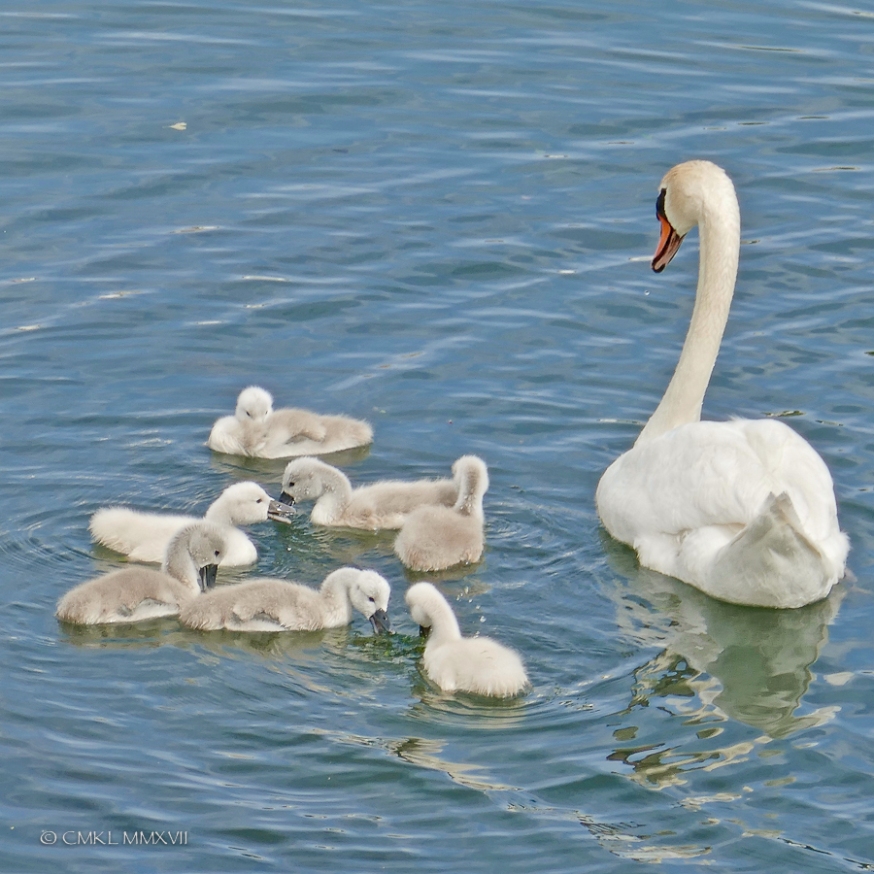 In contrast to the gentle breezes and mild temperatures of southwest France, we arrived in Costa Rica to an atmosphere of nearly saturated humidity, so moist and oppressive that even the cashier at the supermarket had to wipe her face repeatedly with the collar of her polo shirt while she was checking us out. If the locals can’t stand it, how am I supposed to cope? Our customarily crisp and brilliant sunrises were also a bit on the murky side. 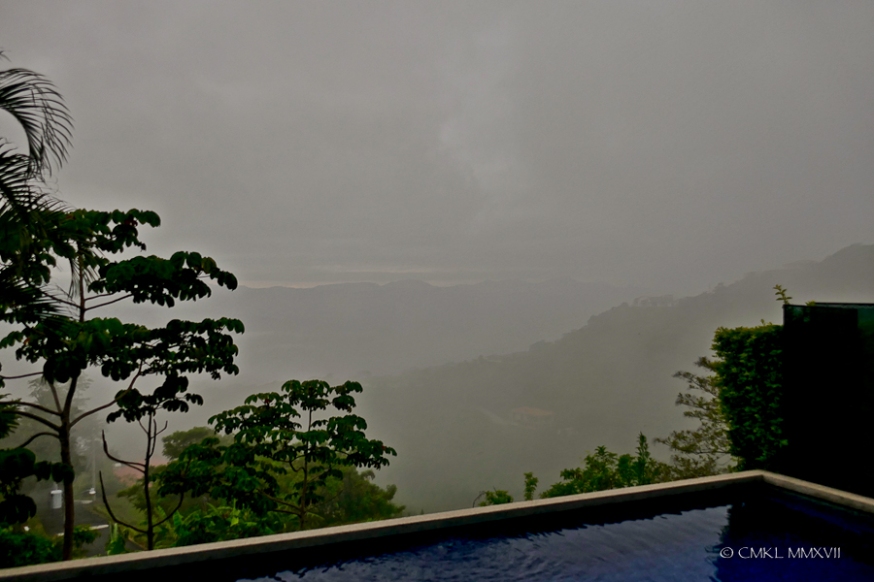 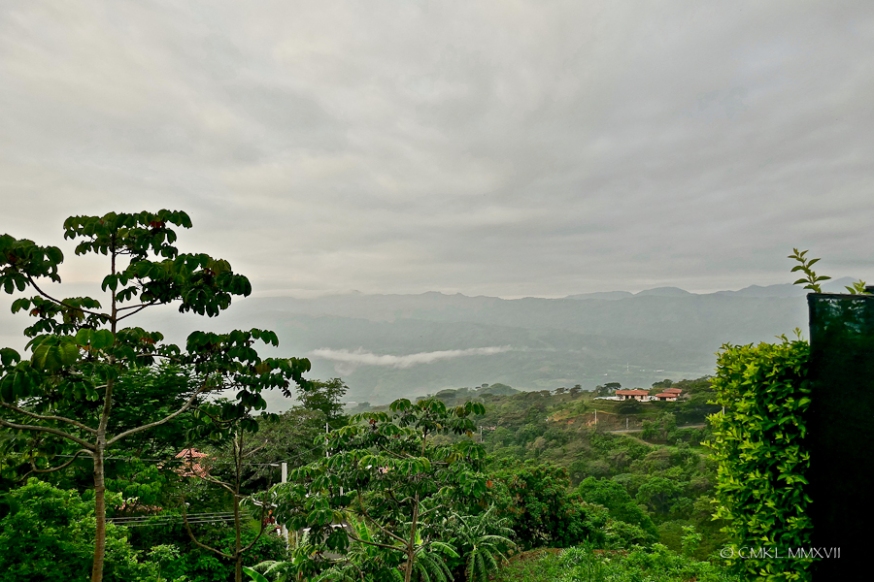 Fortunately, the weather has since reverted to normal, with pleasant mostly sunny mornings and thundering afternoons, befitting the early rainy season.

The hillside across the canyon hasn’t fully greened yet,  but it’s early days – the rainy season has barely started. However, when it does rain one can’t easily ignore it! 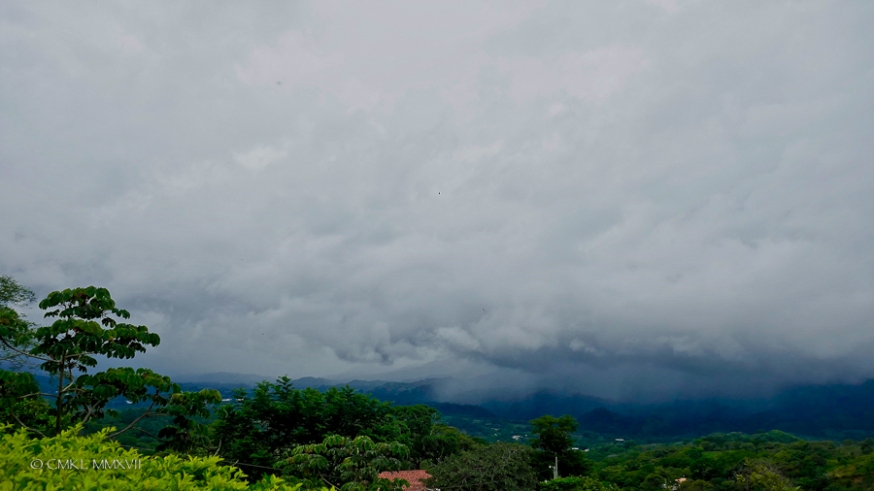 My circadian rhythm has reset itself, adjusting to the near equatorial day with daylight from 5h00 to 18h00 and brief dawn and dusk periods. In Costa Rica, pretty much the whole country rises and retires with the proverbial chickens, except the party crowd in posh Escazu, of course. In addition to the properties of lux influx, I postulate that an adaptation to the local alimentation greatly influences my Tica-style sleep-wake cycle. After all, one can not possibly start the day in Costa Rica without a serving of Gallo Pinto, can one now?

Speaking of food, Costa Rican ants like their protein, too. It took a steady stream of tiny Formicidae roughly 36 hours to completely strip this beetle of all nourishing organic matter. A contiguous ant-highway extended along my bathroom tile grout for several meters between the supine victim and the outdoors, moving along with single-minded determination. Amazing!

The statuesque lady below, sunning herself on our cement pool surround is a member of one of our resident Black iguana families, Ctenosaura similis, Iguanidae. They live on the hillside below and above us and their extensive escape tunnels incorporate our rainwater drainage system. Iguanas are pretty shy and tend to disappear rather quickly when they detect you.

The spikes on the iguana’s tail give them their other name, Spiny-tailed iguana.

Another iguana family lives in the steep mountainside opposite our back door. One of the cave entrances is five or six meters above our carport. They do enjoy sunbathing, so in Costa Rica, I have a much greater opportunity to observe iguana than swans! 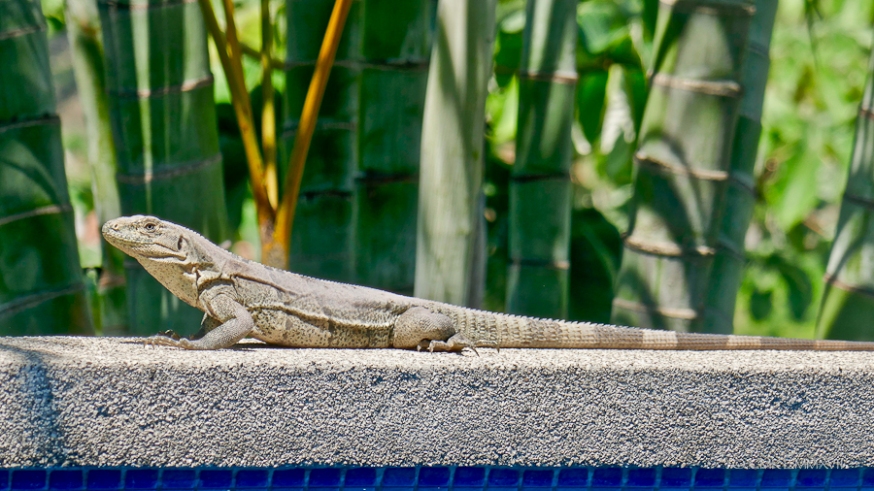 Both locations, Saintes and Atenas, are gorgeous in their own way, don’t you think? 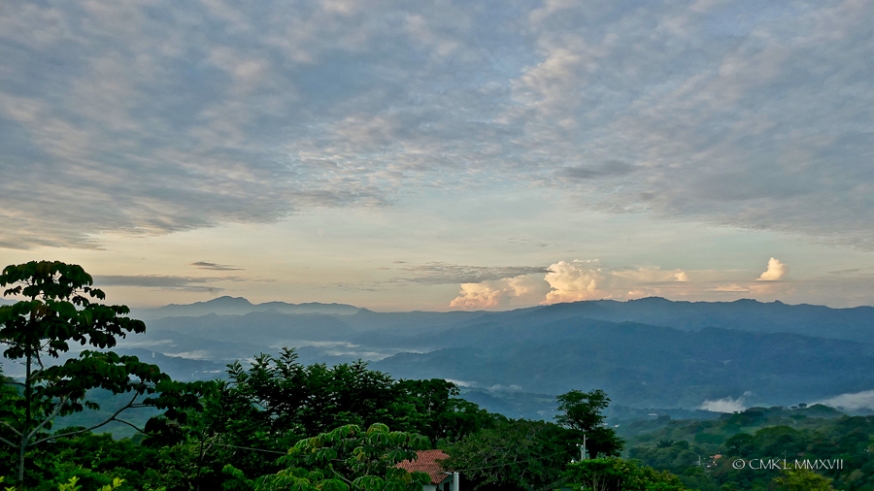 One thought on “Distinctly Different Vistas”