I’ve been writing travel reports and such for a while now. Most of the stories I like to tell have been fleshed out by my photos, while the images, in turn, have given shape to my narrative. Every now and then I wrote a more personal or intimate piece, which may have been precipitated by grief or outrage, or just for the heck of it. Upon reflection, I came to the conclusion that I would like to separate my travel persona from my random rantings and ravings. C’est à dire, I feel the need to give Claudinha her own emotion driven platform so that the Photolera in me can focus on travel adventures.

The concept of a new blog was easier conceived than executed. Since I am presently writing a post, my new blog obviously has come into existence, but not quite as I envisioned. To populate it, I intended to migrate all the more personal and intense posts from my travel blog. “Intention” being the operative term here. After several failed attempts to move selected posts and pages from old to new with a zero success rate, I requested help from the blogging site only to learn that my ideas couldn’t be realized. There will be no migration of any existing material. Period.

Copy & paste per chance? We shall see.

As deeply disappointed as I was about this technical snafu, one has to accept reality and embrace such muddles for what they really are. Nothing more than annoying minor incidence with which we learn to deal with a smile.

Our current home country of France is being turmoiled by a general strike called by seven of its major unions, which has led to trucks in snail-mode blocking freeways and, much more seriously, strikers blockading access to refineries. As a result, gas stations are no longer supplied with fuel and thus consumers are struggling to fill up their cars. We had planned to start a two-day road trip on Wednesday next week for a home exchange in Munich, Germany. Hmm.

We wanted to drive in our baby lion car (small Peugeot, their emblem is a lion) to the Alsace, spending the night at a cozy B&B near Strasbourg, mostly to enjoy some Flammenkuchen in the evening. Not! Wednesday and Thursday were slated indefinitely as strike days by the unions and our government just reaffirmed its firm stance on the issues, which might very well translate again to blocked freeways and dry gas station along the roughly 900 Km/560 miles stretch cross-country we would have had to drive from the Atlantic coast to the German border. Instead, we shall leave by train on Friday morning in the hope that the train conductors are going to be back on the job. Cross your fingers! No Flammenkuchen for us this trip. It also means that we lost our deposit for the room we won’t use, and paying for fairly costly train tickets and taxis. Sadly, the two days we had set aside to spend with our exchange family before they are leaving for our place in Costa Roca, have shrunk to just one. Disappointing, naturally, but we’re way past the age when the potential of being stranded in the middle of nowhere constitutes an adventure.

For us, it was just a little annoying and moderately more costly to change our travel plans, but the extended strike situation weighs so much more heavily on our local small businesses. I heard a number of worried comments this morning at the market, getting further details when I shared a glass of wine on the Hall terrace with our friend Patricia of Artisan Charcutier Besson during a customer lull. Six mornings a week, she and her husband François serve their customers with in-house prepared meats and sausages and products thereof, like flaky meat pies, sauerkraut, deli salads and more. On the seventh day and in the afternoons, they prepare those goodies. They have been doing this for 30 years, cheerfully and proudly. But lately, discontent has taken hold in their hearts. Now they face fuel shortages for their truck and sales-camper, which they have to take to a different market every day of the week. Supplies from surrounding farms are much more expensive to bring in. On top of the recent situation, business has been flat all winter, which holds true all across town, especially for restaurants. Two other acquaintances who own and run well-known restaurants in town are just as worried about the economic situation. These are all hard working professionals for whom the union actions only increases an already difficult situation. Very sad indeed!

On a lighter side, I was able to get a really good prize on local asparagus at the market today, assuring a tasty, seasonal Sunday dinner tomorrow with the last of this year’s asparagus, local potatoes and eggs and ham from Bayonne to our south. Going to be yummy! 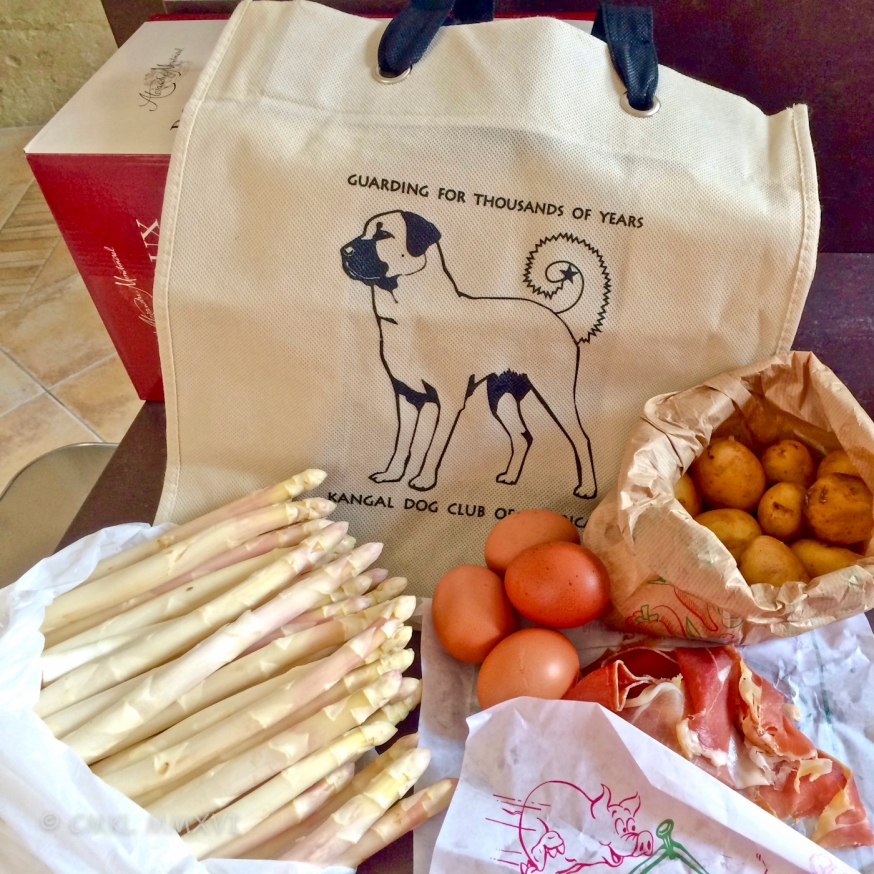